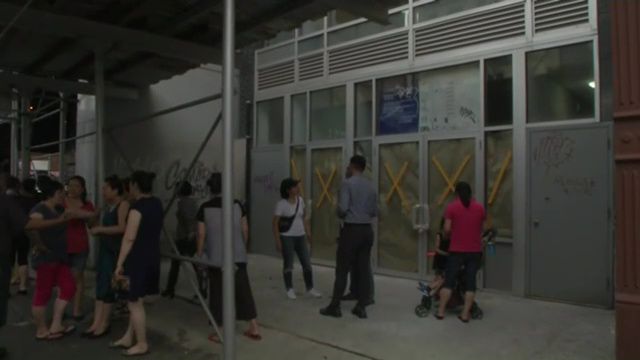 Displaced Bowery tenants should soon be able to return home

Tenants of 83 and 85 Bowery say they can’t wait to be back home.

"We hope the landlord will comply with the agreement. We will be happy to cooperate with the landlord, try to move back in as soon as possible," Jin Shou, a tenant at 85 Bowery, said through an interpreter.

That agreement was announced Friday. The residents were evacuated from their building in January, when an inspection by the Department of Buildings deemed a stairway inside was structurally unstable. More than six months later, the tenants may finally be able to return to their homes if landlord Joseph Betesh makes the necessary repairs by the agreed upon August 31 deadline.

"They're going to have peace of mind for the first time in a long time," said Seth Miller, an attorney for the tenants. "We're not 100 percent there yet because my clients at 85 are desperate to return home, but they have a deadline. They have a promise."

Tenants have been living in a hotel on the corner of the block since that January displacement and say they even witnessed the landlord throwing out some of their personal items in April.

The building has run up a list of complaints with the city for years. Stairway maintenance is just one of the claims.

According to the agreement, the landlord has made several accommodations to the tenants, agreeing to keeping rents down for the next five years, a move tenant representatives say could help ensure the residents won’t be taken advantage of, if they are able to return home.

As for the tenants themselves, they say all they can do is be optimistic that the landlord will stick to his word.

"We only can hope that he will follow the agreement, and I wish there will be no other accidents or whatever happen so we can move back in," Shou said through an interpreter.

The attorney representing the tenants says that the construction on the building could be done a few days before the scheduled August 31 completion date, in which case, he hopes his clients can get home even sooner.