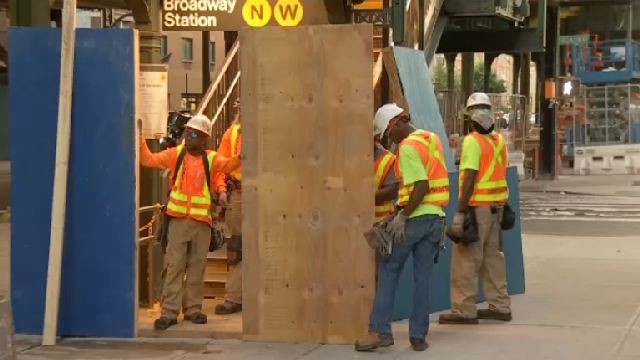 The stations highlighted in red are closed for the next seven months.

Contractors closed the Broadway and 39th Avenue N and W line subway stations Monday and got right to work modernizing them.

Commuters discovered that meant extra work for them.

"It will just be an inconvenience to the people in the community," one woman said.

It's more than an inconvenience, however, for businesses at the station intersections along 31st St.

One woman said in Spanish there's normally a line for a jolt of coffee from people looking to hop on the subway. That was not the case Monday morning.

The interruption is expected to last until February 2019, but the MTA said the work is necessary because the infrastructure is deteriorating.

The stations were built a century ago and had not undergone any major overhauls.

The closure of the stations comes after the 30th Avenue and 36th Avenue stations just reopened after eight months of work. The closures have been staggered so straphangers have to walk only an extra half-mile at most.

"I live up at 30th Ave., so I lived through the last one. It's not so bad. The people from Broadway can walk an extra five minutes to 30th or to 36th Ave., and the stations look great," another said. "Once every 100 years is OK by me."

New York City Transit President Andy Byford told NY1 that the extensive aesthetic improvements, like the artistic flourishes, better lighting, improved public address system and even charging stations, are not as important as the structural improvements.

The biggest complaint, however, is that despite the investment these four stations will still not have elevators, so those in wheelchairs will not be able to use them.

Just a quarter of the city's 472 subway stations are accessible for the disabled.

The MTA's "Fast Forward" Plan would add elevators to 50 stations in the next five years, but it is as of now an unfunded plan.