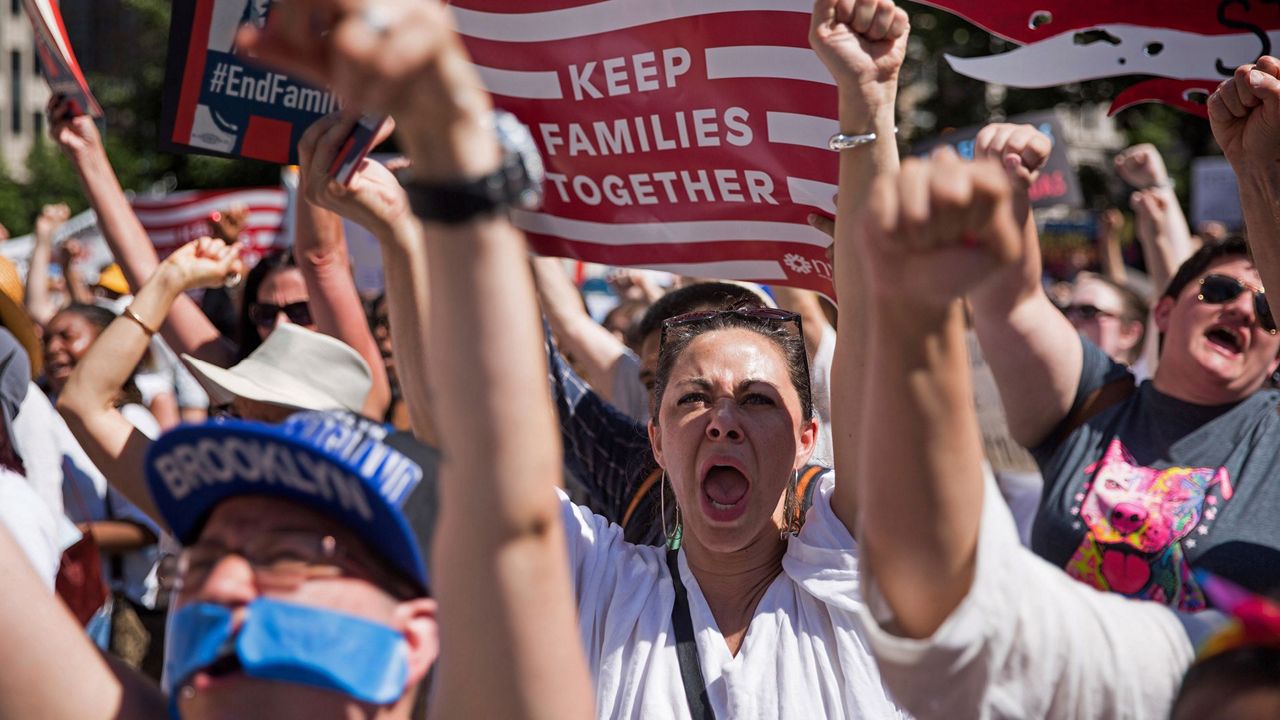 Activists gathered Saturday in hundreds of rallies around the United States, including in New York City, protesting the Trump administration's "zero-tolerance" immigration policy that has led to the separation of migrant children from their parents at the southern border and calling for a clear plan to reunite families.

"We actually have to participate to make it work," actress Kerry Washington, who is from the Bronx, told NY1. "When you have those moments — and a lot of us are having them now, of feeling overwhelmed and afraid and heartbroken about the state of affairs in our country — you have to speak out and come together with other people who care about this country doing the right thing."

Actress @kerrywashington says people have to speak out — like those at the #KeepFamiliesTogether march in #NYC on Saturday demanding @realDonaldTrump reunite all separated migrant families — when they feel heartbroken over the direction of the U.S. https://t.co/XhOVnkdUQy pic.twitter.com/tM2RM4p7uk

An estimated 30,000 people took part in the massive march and rally in the city, unhappy with the U.S.'s approach towards immigration, specifically the "zero-tolerance" policy.

Demonstrators gathered in Foley Square in Manhattan and then marched across the Brooklyn Bridge amid 90-degree temperatures before rallying at Cadman Plaza in Brooklyn.

The Trump administration announced plans in April to prosecute all immigrants caught along the southwest border who illegally enter the country. Parents were jailed and children were taken to government-contracted shelters.

In recent weeks, more than 2,000 children were taken from their families under the policy and transported across the nation, at times thousands of miles away from their detained parents. Some of the children, for example, have been sent to foster care agencies in New York City.

The families split up as they tried to enter the U.S. illegally were largely fleeing extreme violence, persecution or economic collapse in their home countries, often in Central America.

After international condemnation and backlash from some members of his own party, Trump earlier this month ordered that children no longer be separated. The administration says it will continue with prosecutions and seek to detain families together during their immigration proceedings. That move has also sparked an outcry from women's and children's advocates who say children don't belong in jail.

"We need to stop jailing them. There are some very simple solutions — some programs that the president put an end to himself — that would actually allow for these individuals to come into the country to apply for asylum, to work with social workers and check in with Immigration Enforcement, that don't require throwing parents and children in children," said Camille Mackler of the New York Immigration Coalition.

The Pentagon has been asked to provide beds for tens of thousands of migrant families in detention facilities. The Trump administration is also seeking changes to a decades-old settlement governing the detention of immigrant children to try to be able to keep children with their parents in custody for longer periods of time. Under a previous class-action settlement that set policies for the treatment and release of minors caught at the border, families can only be detained for 20 days.

It is not clear if or when the children already separated will be reunited with their parents. The Department of Homeland Security says it is working on a reunification plan, but it has offered no specific details. Confusion has ensued, with parents left searching for their children.

That enraged activists gathered in the city Saturday, demanding a clear plan to bring families together. City and state officials say hundreds of separated children were brought here New York. The protestors said they want more transparency on what happens next to those children.

Some protestors we spoke to Saturday also said Trump's executive order to reunite families does not go far enough, and some have called for the elimination of the U.S. Immigration and Customs Enforcement agency, also known as ICE. Those calls have been growing louder over recent weeks.

MARCHES ACROSS THE NATION

In major cities and tiny towns, hundreds of thousands of marchers gathered across the country, moved by accounts of children separated from their parents at the U.S.-Mexico border, in the latest act of mass resistance against Trump's immigration policies.

Protesters flooded more than 700 marches, from immigrant-friendly cities like New York and Los Angeles to conservative Appalachia and Wyoming. They gathered on the front lawn of a Border Patrol station in McAllen, Texas, near a detention center where migrant children were being held in cages, and on a street corner near Trump's golf resort at Bedminster, New Jersey, where the president is spending the weekend.

"Do you know where our children are?" one protester's sign there asked. Another offered: "Even the Trump family belongs together."

In Washington, D.C., another massive crowd gathered in Lafayette Park across from the White House in what was expected to be the largest protest of the day, stretching for hours under a searing sun. Firefighters at one point misted the crowd to help people cool off.

Lin-Manuel Miranda, the creator of the musical "Hamilton," sang a lullaby dedicated to parents unable to sing to their children. Singer-songwriter Alicia Keys read a letter written by a woman whose child had been taken away from her at the border.

Around her, thousands waved signs: "I care," some read, referencing a jacket that first lady Melania Trump wore when traveling to visit child migrants. Her jacket said, "I really don't care, do U?" and it became a rallying cry for protesters Saturday.

"I care!! Do you?" read Joan Culwell's T-shirt as she joined a boisterous rally in Denver.

Smaller groups came together in city parks and downtown squares in every state, a total of 703 places across the country, and photos quickly started ricocheting around social media.

Some carried tiny white onesies. "What if it was your child?" was written on one. "No family jails," said another.

Children joined in. A little girl in Washington, D.C., carried a handwritten sign: "I get my mommy. Why can't she?"

Though many who showed up to the rallies across the country are seasoned anti-Trump demonstrators, others were new to immigration activism, including parents who said they felt compelled to show up after heart-wrenching accounts of children forcibly taken from their families as they crossed the border illegally. In Portland, Oregon, for example, several stay-at-home moms have organized their first rally while caring for young kids.

"I'm not a radical, and I'm not an activist," said Kate Sharaf, a Portland co-organizer. "I just reached a point where I felt I had to do more."

Immigrant advocacy groups said they were thrilled — and surprised — to see the issue gaining traction among those not tied to immigration.

"Honestly, I am blown away. I have literally never seen Americans show up for immigrants like this," said Jess Morales Rocketto, political director at the National Domestic Workers Alliance, which represents nannies, housekeepers and caregivers, many of whom are immigrants. "We just kept hearing over and over again, if it was my child, I would want someone to do something."

Saturday's rallies received funding and support from the American Civil Liberties Union, MoveOn.org, the National Domestic Workers Alliance and The Leadership Conference. But local organizers shouldered on-the-ground planning, many of them women relying on informal networks established during worldwide women's marches on Trump's inauguration and its anniversary.

Tyler Houlton, a spokesman for the U.S. Department of Homeland Security, welcomed interest in the immigration system and said only Congress has the power to change the law.

"We appreciate that these individuals have expressed an interest in and concern with the critical issue of securing our nation's borders and enforcing our immigration laws," Houlton said. "As we have indicated before, the department is disappointed and frustrated by our nation's disastrous immigration laws and supports action."

Trump took to Twitter on Saturday morning to show his support for Immigration and Customs Enforcement amid calls from some Democrats for major changes to immigration enforcement.

Tweeting from New Jersey, Trump said that Democrats "are making a strong push to abolish ICE, one of the smartest, toughest and most spirited law enforcement groups of men and women that I have ever seen." He urged ICE agents to "not worry or lose your spirit."

In Portland, Sharaf and other mothers who organized the rally hoped to attract 5,000 people.

Right-wing activists with the group Patriot Prayer also have a permit to march later in the day Saturday and the Portland Police Bureau said Friday they planned to have a heavy police presence.

"This is not my wheelhouse," Conroy said. "As far as I'm concerned, this is a national emergency that we all need to be focused on right now."

Immigration attorney Linda Rivas said groups have met with U.S. authorities, congressional representatives and other leaders to discuss an escalating immigration crackdown that they say began decades ago. But the family separation policy has been a watershed for attracting a broader spectrum of demonstrators, she said.

"To finally have people on board wanting to take action, marching, taking to the streets," Rivas said. "It's been motivating for us as advocates because we have to keep going."

In Columbus, Ohio, at least one person was arrested when protesters blocked a downtown street, the Columbus Dispatch reported. But most of the rallies remained peaceful.

In downtown Los Angeles, John Legend serenaded the crowd while Democratic politicians who have clashed with Trump had strong words for the president, including U.S. Rep. Maxine Waters who called for impeachment.

Margarita Perez held up a Mexican flag as speakers addressed the crowd in Albuquerque, New Mexico.

"Those children that they are incarcerating and separating, they are our future generations. We need to provide for these children," she said. "They will be our future leaders."

Two thousand miles away in Boston, a Brazilian mother separated from her 10-year-old son at the border 37 days ago approached the microphone.

"We came to the United States seeking help, and we never imagined that this could happen. So I beg everyone, please release these children, give my son back to me," she said through an interpreter and wept.

Her son has pleaded with her on the phone to bring him home.

"I beg you all," she said. "Please fight and continue fighting, because we will win."

In Washington, protesters ended their march at the white-columned Department of Justice. They taped their protest signs, written in English and Spanish, to its grand wooden doors.

Activists gather to protest the Trump administration's approach to illegal border crossings and separation of children from immigrant parents in Lafayette Square across from the White House, Saturday, June 30, 2018, in Washington. (AP Photo/Alex Brandon)

Activists gather to protest the Trump administration's approach to illegal border crossings and separation of children from immigrant parents in Lafayette Square across from the White House, Saturday, June 30, 2018, in Washington. (AP Photo/Alex Brandon)