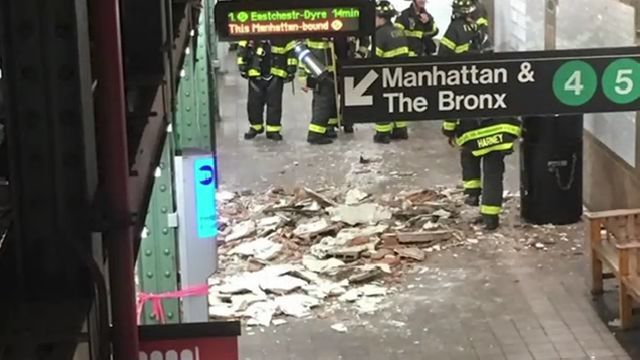 It’s a fast-paced struggle for subway riders every day.

But straphangers also do a lot of waiting, sometimes amid the drip-drip-drip of leaks like at Brooklyn’s Borough Hall station a week after a ceiling collapse injured a man and snarled service.

"We have reached a point where we can no longer ignore the neglect that we we have witnessed in our transportation system," said Brooklyn Borough President Eric Adams.

"We don’t think that some magical power has it out for Brooklyn. We know that the state has failed to invest in the subway and that is why it’s falling apart," said Danny Pearlstein of the Riders Alliance.

They’re calling on Governor Andrew Cuomo, who oversees the system, and state lawmakers to fund the MTA’s Fast Forward Plan which seeks to quickly improve capacity and accessibility through billions of dollars in strategic upgrades and renovations.

"The MTA though does need to provide an exact price tag.  Because the three of us support fixing the MTA but we have 200 other colleagues in the state senate and the state assembly why its going to cost so much money," said State Assemblyman Bobby Carroll.

The three legislators attending the news conference said congestion pricing - charging vehicles for entering most of Manhattan - should pay for the work. But one of them blamed Cuomo for not fully pushing through such a plan during the legislative session.

"It was terrible that his panel put out a congestion pricing plan and the governor then didn't actually put it in the budget.  It was his job to do that and so he talked out of both sides of his mouth. He never even hands the legislature debate it. It’s ridiculous and mendacious," Carroll said.

The governor's office responded saying in part, "The Governor single-handedly revived the idea of congestion pricing and was the only voice in budget negotiations fighting for its passage."

The legislature did pass what the governors calls the first phase of congestion pricing, a fee on for-hire vehicles heading south of 96th Street in Manhattan, nothing though on personal vehicles or changes to tolls on bridges and tunnels.