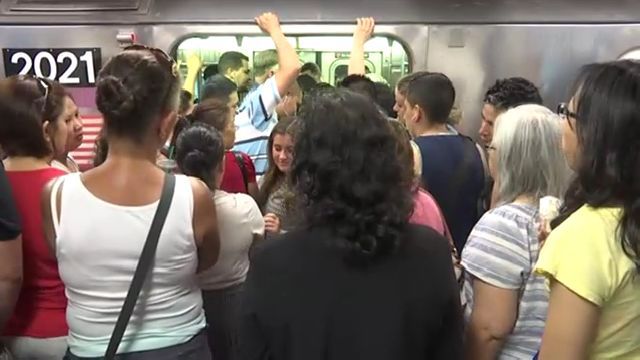 Summer's here, and the heat is on - especially in the subway.

"Unbearable. That's the best way to put it - unbearable," said one heated rider.

This time of year, temperatures are often higher in the subway than above ground, typically climbing into the triple digits during heat waves.

And expected to rise, according to a 2015 report on Climate Change, another five to nine degrees in the coming decades.

A new study by the Regional Plan Association says the MTA needs to turn down the heat.

"It's all about a bunch of different actions that can be done, that when added up, would hopefully dramatically change the amount of heat that's generated and how warm a station actually gets," said Richard Barone of the Regional PLan Association.

Ironically, the subway platforms became sauna-like when the MTA moved to cool down subway cars. Air conditioning on trains pumps out all that hot air into tunnels and stations.

To cool things down, the study suggests making the MTA's subway cars - some of the heaviest in the world - much lighter.

That would reduce the amount of electricity needed to run them, producing less excess heat.

Lighter cars also would make it easier to apply the brakes, reducing the friction needed to stop trains - another source of heat.

"We need to be thinking about ways to cool things that don't themselves output a lot of waste heat," Barone said.

Cooling things down is a must, according to the report, because the MTA will need to run trains more frequently to ease overcrowding - generating more heat.

The report points to London as an example of a city that has turned to new technologies to cool its transit system.

Transport for London has made braking efficiency a key part of its "Cooling the Tube" program.

"They're also looking at ways to cool their stations through using water and other cooling methods to actually, to change that environment that's not a traditional air conditioning," Barone said.

The MTA has introduced a climate control system in the new Hudson Yards and Second Avenue Subway stations - and piped chilled air onto the 4, 5 and 6 subway platforms at Grand Central.

An MTA spokesman said the agency will review the recommendations.