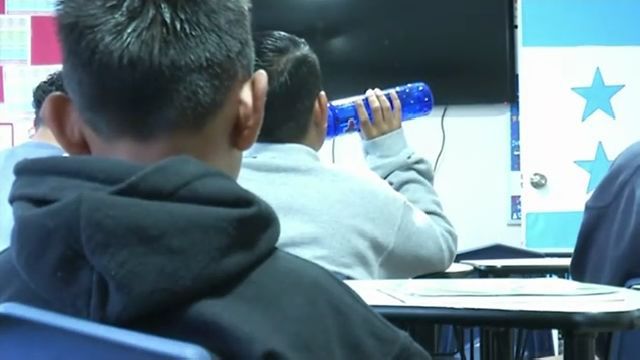 In a conference call with reporters, Governor Andrew Cuomo this week said hundreds of children are being brought to New York State, but a federal gag order prevents even the governor's office from getting basic information about who they are, and where they are located.

"They are being sent, children, with no information. Literally no evaluation. And it's happening all across the state. We could have as many as 700 children," Cuomo said.

Cuomo says New York State's constitution requires a certain level of care for these children, and it's unclear to him that they are receiving it.

New York has a very robust foster care system, which is why so many children are likely being brought here.

The issue permeated the governor's race this week.

Democrat Cynthia Nixon was at an Upper West Side church where undocumented immigrant Debora Vasquez-Barrios is taking sanctuary.

ICE agents are threatening to deport her after a traffic stop where she could not produce a driver's license.

She has two small children.

"It's very painful. And now I understand the mothers on the border who are being separated from their children," Vasquez-Barrios said.

Nixon again called for the abolition of ICE, and referred to it as a "terrorist organization."

"ICE has strayed so far away from its mission. It is supposed to be here to keep Americans safe but what it has turned into frankly is a terrorist organization of its own. That is terrorizing people who are coming to this country," Nixon said.

Cuomo does not favor abolishing ICE. He was asked about it ealier this week.

"No, I think ICE should be a bonafide law enforcement organization that prudently and diligently enforces the law," Cuomo said.

Nixon has called on Cuomo to sign an executive order, but the governor says to do so requires a law being passed by the legislature.

That's unlikely anytime soon since the State Senate and State Assemby adjourned Wednesday night, likely for the remainder of the year.