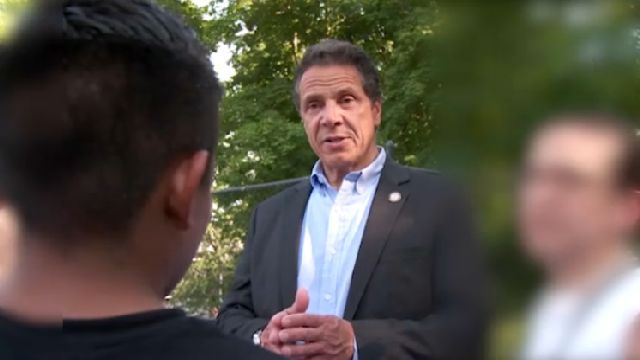 NEW YORK - Governor Andrew Cuomo on Friday released video of him touring a children's residence where kids separated from their families have been staying.

During his visit to the undisclosed location, the governor met with children who have been brought to New York after being separated at the southern border.

He says it has been difficult to actually find the reportedly more than 7,000 immigrant children in New York facilities.

According to the Trump administration, about 500 immigrant children have been reunited with their families since May after being separated at the southern border.

So far there is no concrete plan for reunification for the more than 2,300 other kids separated from their parents and placed in federal facilities.

The city, meantime, is also demanding information about migrant children that have been placed in state facilities.

Mayor Bill de Blasio fired off a letter to the Department Health & Human Services saying he is concerned about the safety of the children being held.

Hundreds of children who were separated from their families at the southern border are now in New York.

The mayor wants to know the exact number of children, their ages and how the federal government plans to reunite them with their family.

He also says, "The children are struggling with profound emotional trauma and require immediate medical care."

The letter comes a day after the mayor was turned away from a facility housing immigrant children Thursday during a trip to Texas.

Amid the outcry over illegal immigrant children separated from their families, President Trump met at the White House Friday with people whose loved ones were allegedly killed by undocumented immigrants.

In a press conference, Trump spoke about immigration and blamed the media for unfairly portraying the immigration issue.

The remarks come just days after the president signed an executive order, reversing the policy on Wednesday after criticism from both Democrats and Republicans.

Trump also fired off a series of tweets Friday telling Republicans not to be "wasting their time" on the effort until after the November midterm elections, when he hopes more Republicans will be in office.

He also accused Democrats of using "phoney stories of sadness and grief" as a way to help them in upcoming elections.

The bill would provide a potential pathway to citizenship for recipients of the Deferred Action for Childhood Arrivals program or Dreamers.