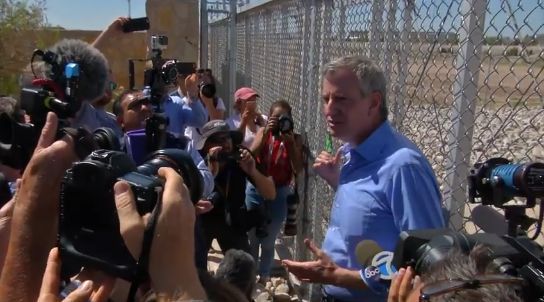 A group of mayors from around the country, including Mayor Bill de Blasio, were turned away Thursday from a Texas facility housing immigrant children separated from their families.

The bipartisan group of lawmakers tried to visit a facility in Tornillo, Texas to witness conditions inside.

The visit comes as the Justice Department asked a federal judge to change the rules on detaining families caught at the border.

On Wednesday, President Donald Trump reversed a policy that has already separated more than 2,300 children from their parents.

It's not clear what will happen with the children who have already been separated.

In an interview with NY1, de Blasio said Trump's reversal is not enough.

"People have to understand that we want to solve the problem. We have to put pressure on the administation for change, and this was the way to do it. Gathering with a bipartisan group of leaders from around the country to demand this change, and to bring attention to what's happening, and to not let the executive order be an excuse. It may be a small step in the right direction, but it doesn't solve the problem," de Blasio said.

De Blasio's trip comes after he visited Cayuga Centers in East Harlem Wednesday. NY1 first reported Thursday that children who had been separated from their parents were being sent there.

The mayor says hundreds of kids taken from their parents are currently in the five boroughs.

Both centers are tending to some of the children who have been separated from their familes.

Trump spoke with some of the children at one of the facilities, where she told them to "be kind and nice to each other."

The first lady says she wants support the children and asked staff to reunite them with their families as soon as possible.

Staff members told the first lady that the children there, who mostly range between the ages of 12 and 17, are usually distraught when they first enter the facility.

President Trump, meanwhile, blamed Democrats for the humanitarian crisis at the U.S. border.

During a cabinet meeting Thursday, he blamed "extremist, open-border Democrats" for creating "a massive child-smuggling industry."

Trump also compared the facilities where migrant children are being held to those of former President Barack Obama.

He says the facilities under his administration are the "nicest that people have seen."

"We have a situation where some of these places are really being run well," he said. "I give a lot of credit to Secretary Neilsen and all the people that have worked. It's the nicest that people have seen. But it should still not be happening."

The president also said that the executive action he signed on Wednesday was limited in scope but that his administration is working on reuniting previously separated groups.

Dozens of people gathered Wednesday night and Thursday morning at LaGuardia Airport after they got word that children would be arriving on several flights.

They held signs showing support for children who have been affected by Trump's zero-tolerance policy on immigration.

Over the past several weeks, more than 2,300 children have been separated from their parents while entering the U.S. illegally from countries like Guatemala and Honduras.

Queens Councilman Jimmy Van Bramer, who was at the protest, tells NY1 that several people, including a flight attendant, told him there were several children who arrived at LaGuardia, but they could not confirm if they are children who were separated from their parents.

In a statement, American Airlines says it does not support the Trump administration's policy and that it has requested the government to refrain from using its planes to transport the children.