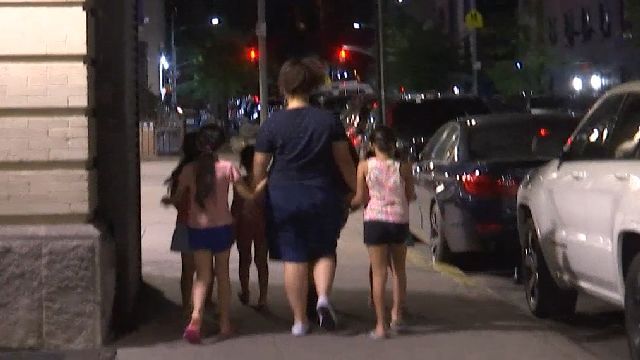 Sources told NY1 on Tuesday that children from the southern border are being brought to the city after they have been separated from their families.

Early Wednesday morning, the station shot exclusive video of some unusual activity at a foster agency in East Harlem.

Sources tipped off NY1's Josh Robin to go to the Cayuga Centers facility in East Harlem.

He was told that kids separated from their parents along the southern U.S. border would be brought there.

The video, shot at 12:45 a.m., shows five girls, accompanied by two Spanish-speaking women, being led into the lobby of the building where the Cayuga Centers is housed.

"That's what the facilities have told us," Cuomo told NY1's Roma Torre.

The children eventually went into the lobby and asked for six on the buzzer to be pressed, the number for Cayuga.

About an hour later, they left with coverings shielding them, with no one offering any comment.

TRUMP'S EXECUTIVE ORDER ON THE SEPARATION OF CHILDREN

President Donald Trump signed an executive order Wednesday stopping the separation of children from families who are detained at the border.

It was a dramatic turnaround for Trump, who has been insisting, wrongly, that his administration had no choice but to separate families apprehended at the border because of federal law and a court decision.

The order does not end the "zero-tolerance" policy that criminally prosecutes all adults caught crossing the border illegally. But, at least for the next few weeks, it would keep families together while they are in custody, expedite their cases and ask the Defense Department to help house them.

Under a previous class-action settlement that set policies for the treatment and release of minors caught at the border, families can only be detained for 20 days. A senior Justice Department official said that hasn't changed.

"This is a stopgap measure," said Gene Hamilton, counsel to the attorney general. Justice lawyers were planning to file a challenge to the agreement, known as the Flores settlement, asking that a judge allow for the detention of families until criminal and removal proceedings are completed.

So Trump's order is likely to create a fresh set of problems and may well spark a new court fight. It's unclear what happens if no changes to law or the settlement take place by the time families reach the detainment deadline. The language also leaves room to separate children from parents if it's best for the child's welfare.

It's also unclear what will happen to the children already separated. Health and Human Services Secretary Alex Azar said his department will start reuniting detained immigrant children with their parents — but he made no specific commitment on how quickly that can be accomplished. And officials said the cases of the children already separated and turned over to their custody would proceed as usual.

HOW THE STATE AND CITY ARE RESPONDING

At least 100 to 300 kids have already been taken to New York state, according to Cuomo, who said the federal government would not tell him the exact number.

The governor said the state offered special trauma and language services to the facilities where the kids were being held.

He said the Trump administration rejected the offer.

Mayor Bill de Blasio visited Cayuga on Wednesday afternoon. He said 239 children were currently at the center at the time he visited it as a result of the Trump administration's policy. He said there have been about 350 children brought there since the start of the policy enforcement.

De Blasio said Cayuga is a day facility where the children come for classes and services. He said the children are in individual foster homes and not a dormitory.

The mayor said the federal government has not given the city any information, even though the city has asked for it.

"Clearly, this information was not provided on purpose," de Blasio said.

Mayor inside Cayuga Center, meeting with senior staff and the CEO (via teleconference). Will brief public shortly. pic.twitter.com/R0Pq2nKo2N

The mayor's press secretary says de Blasio would head to a Texas border town Wednesday afternoon to try and gain access to a detention facility Thursday morning. De Blasio is expected to join several protests outside the location.

Mayors from around the country — including from Los Angeles, Seattle, and Miami — are expected to be in Tornillo by Thursday morning to rally for a permanent solution.

The Mayor will travel to the border town of Tornillo, Texas this afternoon. He and mayors from across the country will attempt to gain access to the detention facility at the Marcelino Serna entry point tomorrow morning.

NY1 has reached out to Cayuga and to the federal agency that is handling the kids for comment.

The East Harlem facility is still operating, and a group of children were seen being led into the center around 5 p.m. It is not clear if they were undocumented children who separated from their families at the U.S. border.

The mayor and the governor appear to be learning key elements of what is happening in New York in real time. That is because federal agencies breaking up these families are, by all accounts, uneager to share information with local officials here.

The news media is also getting the brush off. "And literally it's just been a chaotic mess," Cuomo said.

PROTESTS OUTSIDE THE EAST HARLEM FACILITY

Some people protested outside the East Harlem Cayuga Centers facility Wednesday night, demanding that the children be released.

"We need immigration policies that are not fueled by hate," another protester said. "Kids need their families as much as food, water, and shelter."

Jose Xavier Orochena was outside as well. He is an attorney who says he represents the mother of three children he says were brought to the East Harlem Cayuga Centers facility. According to him, the kids have been housed at the facility for about four weeks after they were brought from the Texas border.

Orochena said it is not clear why the children were brought to the city, as their mother has family in North Carolina. Orochena said those family members are petitioning for the children to be released to them but cannot meet all the requirements for which Cayuga is asking.

He said the family looked up his firm once the kids were brought to East Harlem, contracting it to represent the kids and the mother, who has been detained in Arizona.

The attorney said he has made contact with the deportation officer assigned to the mother's case and is waiting to go in front of an immigration judge July 3 in the hope she will pay a bond, be released, and can pick up her children. Orochena said the family is applying for asylum.

The mother came to the United States from Guatemala.

"They are facing life and death at home. It's that simple," Orochena said. "They come here seeking protection, seeking asylum."

Many New Yorkers took to Union Square on Tuesday night to protest the separation of immigrant families.

Demonstrators said they were outraged by the Trump administration's policy and fear the long-term effects this will have on immigrant children.

"Especially a young child, completely disoriented. They're not going to be able to retrace their steps or know where they were taken or be able to advocate for themselves. It's unconscionable, it's criminal and it needs to end," said one participant.

"To just take children away from their parents that quickly. The long term damage it has on the child is something they will have to deal with for the rest of their lives," said another.

The U.S. Department of Homeland Security said nearly 2,000 immigrant children were separated from the adults they were traveling with, from April 19 to May 31.

EFFORTS TO HELP THE CHILDREN AND FAMILIES

Some New York City organizations and advocacy groups are soliciting donations and help for the children separated from their families, as well as organizing protests. A rally in support of these families is scheduled for June 30 in Foley Square, for example.

The New York City Civil Liberties Union said it will mobilize people and said it intends to sue the Office of Refugee Resettlement.

But people are advised to be wary of who they are donating to, and the attorney general's office has tips for those who want to help:

Take time to research the organization

Find out where your money will go. People are advised to be wary of crowdfunding pages such as GoFundMe and be sure a charity has authorized a campaign.

Be wary of overly emotional pleas for money, such as phone calls.

Do not ever disclose personal information, such as your social security number.

Never give cash; give you contribution by check or credit card made payable to the charity.

For more information on evaluating a charity or campaign, see resources such as Charity Navigator, Charity Watch, or the Better Business Bureau.