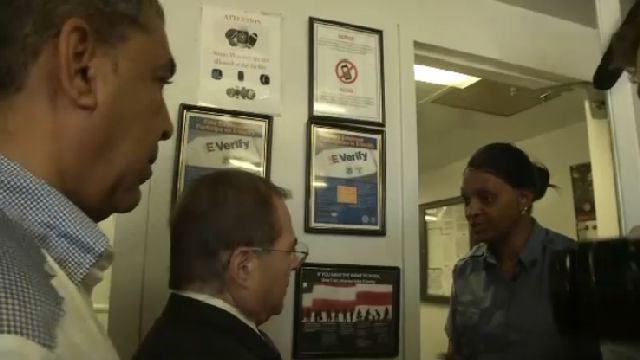 Members of New York's congressional delegation made an unannounced visit to an immigrant detention center Sunday.

They along with New Jersey Representatives joined immigration rights advocates at the Elizabeth Contract Detention Facility in Elizabeth, New Jersey.

They are conducting an inspection and speaking with asylum seekers who have been separated from their children.

The group was not allowed into the center for over an hour after they first arrived.

"We have legal authorization to come in and visit them, and yet this privately run facility and corporation that makes money by warehousing men and disallowed us to come in here, and they called the local police department, which clearly has no jurisdiction in a federal facility," said Congressman Adriano Espaillat.

"We met with five gentleman. Three of whom had their young daughters or sons or sisters or brothers torn from their arms. Some in the middle of the night," Congresswoman Carolyn Maloney told reporters afterward.

The visit comes as the Trump administration cracks down on illegal entries at the border.

Published reports say nearly 2,000 children have been separated from their families from April 19 through May 31.

U.S. protocol prohibits detaining children with their parents since they are not charged with a crime, while parents can be criminally prosecuted.

Ralliers say it's no coincidence they're protesting on Father's Day and want to point out how the policy is affecting families.