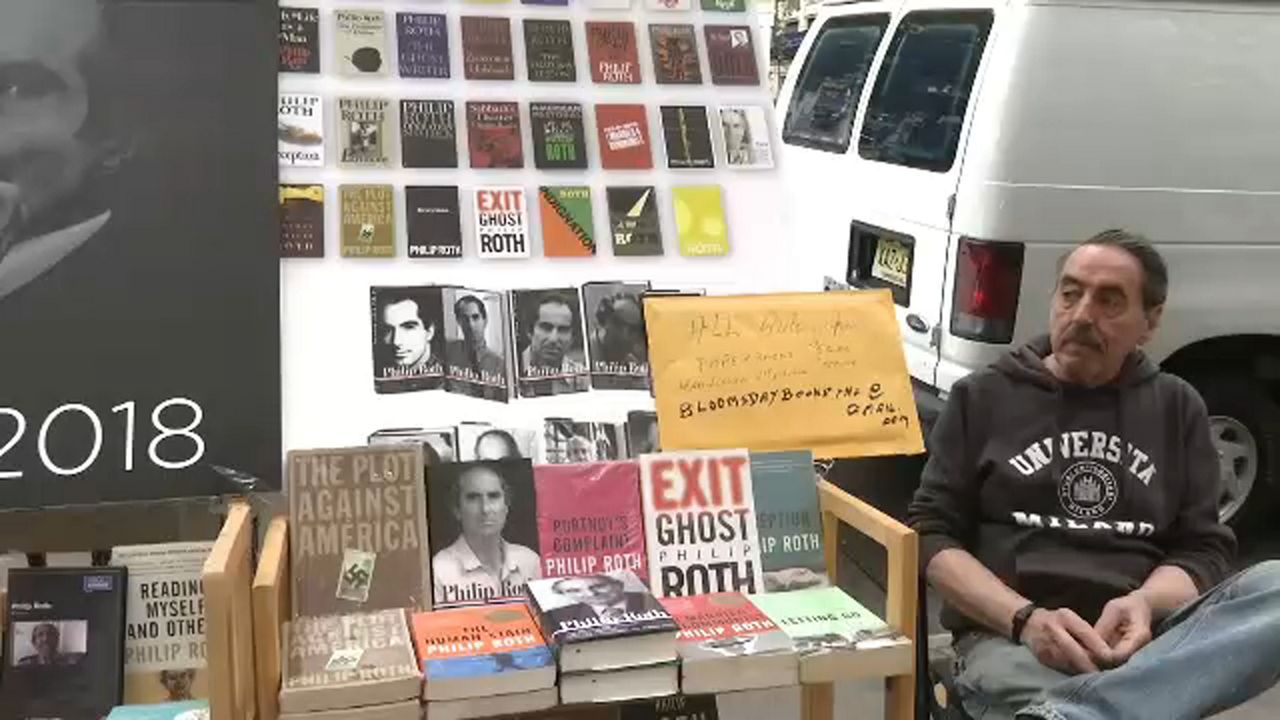 Inside a self-storage facility on the Upper West Side, is a shrine of sorts to Philip Roth.

Nearly everything is autographed by the legendary writer, from a copy of his 1998 novel "I Married a Communist," to a profile in Esquire magazine.

The items belong to Enrico Adelman, a longtime bookseller who has accumulated thousands of autographed copies of every book Roth ever wrote.

"All on the title page," Adelman said, showing one of the signed copies. "I think it's a great signature. He ws left-handed."

Adelman got them not by attending book signings, but by forging a surprising friendship with the publicity-shy author.

For 25 years, Adelman sold books on the sidewalk in front of Zabar's on the Upper West Side. Roth stopped by one day in 1989.

Philip Roth at the bookstand.

"I couldn't help myself. I just went to him and said, 'Excuse me, you really look a lot like Philip Roth,'" Adelman said. "And he just put out his hand and said, 'I am.'"

The two later met at a party, and again at Adelman's bookstand.

Adelman worked up the courage to ask Roth if he would sign 50 books. Roth agreed.

"I was thrilled," Adelman said. "And then I just kept pushing the envelope, and buying more and having him sign more."

Adelman would lug crates of books to Roth's apartment or country home, and Roth would gladly sign them, free of charge.

They became friends, often grabbing meals together. Adelman met Roth's biographer, who explained why Roth was so generous with to the bookseller.

"Philip was very brief. He told him, 'I like him,'" Adelman recalled.

In late April, Adelman brought Roth 300 more books to sign. On May 18, the author sent Adelman a text:

Adelman said that until now, he never sold the books at a premium.

Some of the books that Enrico Adelman sold.

But demand for the signed copaies has surged since Roth's death. Adelman is now selling an autographed copies of Roth's first book, "Goodbye, Columbus," on Amazon for $3,000.

"I remember once, him saying, 'I hope you're putting these away for yourself,'" Adelman recalled.

On Sunday, Adelman returned to his old spot by Zabar's, this time only displaying Roth's autographed works.

"I feel blessed, blessed, honored," Adelman said. "He was an important part of my life.

An important part of his life -- now remembered through Roth's words and his generosity to a sidewalk bookseller on the Upper West Side.