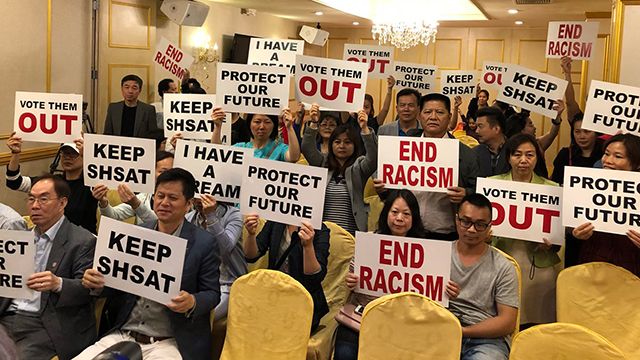 Asian-American groups gathered at a meeting in Sunset Park on Monday accused Mayor Bill de Blasio of discrimination for proposing to change the admissions process at the city's eight elite public high schools to make them more diverse.


A lot of “vote them out!” cries over proposed changes to the specialized high school exam from Asian American advocacy groups. pic.twitter.com/CdPFfRdrCL

Over the weekend, de Blasio stepped up his push to increase the number of black and Hispanic students in elite schools like Stuyvesant and Brooklyn Tech, saying admission should no longer be based on a single exam, the Specialized High School Admissions Test (SHSAT).

But Asian students say his proposal would end up denying them admission.

Asian students make up about 16 percent of the school system, but about 52 percent of those accepted to the eight schools. At Stuyvesant, three out of four students are Asian.


Signs at a press conference in Sunset Park on the Mayor’s plan to diversify the specialized high schools. A coalition of Asian American groups says this plan amounts to anti-Asian racism. pic.twitter.com/e0J99uKKp6

"For new immigrants, the test something that is a leveling factor. It's easy to prepare for, they know about it, they can buy a book or they can buy a course. But they can make their kids do it," said Chris Kwok of the Chinese- American Citizens Alliance of Greater New York. "So it's a ladder of success for them."

The mayor wants the state to enact a law requiring that the top seven percent of the students at each city middle school be offered a spot at an elite high school. He said this would boost the number of black and Hispanic students at the elite schools to 45 percent, from 9 percent. But that would reduce the number of Asian and white students.

"I think it's being done as quickly as it is in order to eliminate the opportunity for stakeholders to weigh in and explain their reservations about the approach that they're taking," said Larry Cary, the president of the Brooklyn Tech Alumni Foundation.

State lawmakers have said in the past that they do not want to change the test. They have listened to alumni interest groups from the schools and have said that the exam is the fairest way to determine who should be admitted.

The powerful alumni groups from the specialized high schools have successfully lobbied for decades to keep SHSAT. Some have argued that opening up admissions at the specialized schools would weaken them. De Blasio said that argument is un-American.

"The mayor raises legitimate concerns," Cuomo said. "I don't know that there's much of an appetite in Albany now to get into a new bill, a new issue."

How are students reacting?

At Stuyvesant, students said they are divided.

"Students who come from higher class families definitely get to pay for preparatory classes and they do get a bigger chance to get in," Stuyvesant High School student Anna Makuyed said.

A middle school student who has been studying for the specialized high school exam for years details his tutoring regimen. Says if the Mayor takes away the test after he’s put in all this work “that is the definition of unfair.” Applause. pic.twitter.com/n1YvCdG2bL

De Blasio and his supporters disagree. They say it's not a question of unequal ability, but of unequal opportunity.