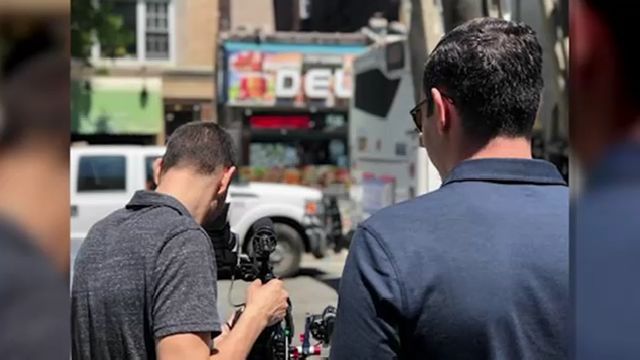 Like many subway riders, filmmaker Emmett Adler is thinking ahead to when the L train stops running between Manhattan and Brooklyn next April.

"I never get sick of talking about this issue. Just because it goes in so many different directions and there's so much unknown right now," Adler said.

Which is what spurred him to start working on what he calls "The L Train Doc."

It's a documentary about the planned shutdown of the line from Bedford Avenue in Brooklyn to Eighth Avenue and 14th Street in Manhattan for 15 months.

"There are businesses who are completely freaking out, residents, a lot of hand wringing, a lot of nervousness. You know, everyday life is not going to be the same," Adler said.

Members of Adler's crew have been shooting fiery town hall meetings about the closure, and interviewing local residents, affected business owners and politicians as well as officials from the MTA.

At the heart of the "L Train Doc" - stories about New Yorkers whose lives will be upended.

"We were talking to an owner of a tattoo parlor off Bedford. He said, 'The L train is the money train, what are we doing to do without my money train that brings a constant, steady flow of new custmers and tourists into the shop,'" Adler said.

The film will also have a broader message, they say, about the state of the city's mass transit system.

"If you can't take care of public transportation, your city is going to crumble. So this is probably the bigger future projection, is how to fix and prevent problems like this in the future," Mojica said.

Don't expect to see the documentary until the fall of 2019, when the filmmakers say they will have had enough time to review the impact of the L train shutdown.