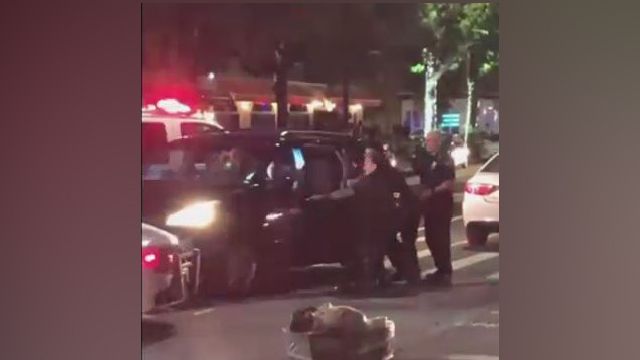 A man was arrested Sunday for smashing into several NYPD vehicles and nearly running over officers after they stopped his car in Manhattan — a scene all caught on video before police chased after the driver.

George Lopez, 27, faces multiple charges, including reckless driving, driving while impaired by drugs, and driving without a license.

Police said they had stopped his blue Toyota around 3:45 a.m. near Payson Ave. and Dyckman St. in Inwood after noticing the car driving erratically.

Lopez refused to open his doors to get out of the car when officers stopped him, the NYPD said.

The video above then shows the Toyota — while multiple officers are next to it — driving into the driver's side of an NYPD car, backing up and nearly running over officers and then spinning in the intersection multiple times, hitting some parked cars.

The car then sped off onto a sidewalk and drove away from the scene as police vehicles gave chase.

Officials said that ended in Kingsbridge, after Lopez drove the wrong way on a Mosholu Parkway exit ramp before crashing into a parked car and coming to a stop.

Police then took Lopez into custody. He was transported to a local hospital for minor injuries he suffered in the collision.

Three police officers were treated for minor injuries at local hospitals as a result of the altercation.