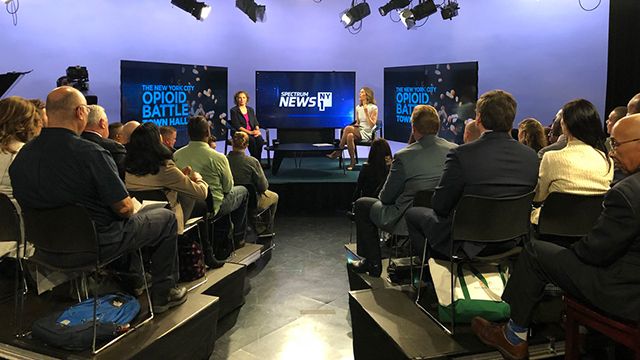 NY1 on Tuesday night looked into the opioid epidemic in the city with a special report, along with a live town hall, at which safe injection sites were hotly debated.

That special report introduced us to people who are touched by the opioid epidemic, people battling opioid addiction, law enforcement who work to cut supplies on the streets, families that have lost oved ones.

The live town law hall event included some of them and other New Yorkers who have been personally affected.

Earlier this month the city released a study showing the mayor's support to pilot safe injection sites in the city. This was discussed in our special and sparked debate at the town hall among some panelists.

Department of Health Commissioner Dr. Mary Bassett and City Council Speaker Corey Johnson explained why they are in favor of the pilot:


Dr. Mary Bassett says overdose prevention centers allow people to use in a place where they will not die of their use. She also says they are proven to provide an open door to access to treatment. #NYCinCrisis pic.twitter.com/qQ2XsGAeio

The NYPD's chief of detectives spoke about law enforcements efforts, acknowledging they cannot arrest their way out of the problem, saying the department is doing more to target high-level drug dealers and helping connect people who are using to services.


The chief of @NYPDDetectives told the audience of the #NYCinCrisis town hall that the NYPD will work tirelessly until they can push the level of overdoses down. "It is incredibly frustrating to the men and women, but you have my assurance they are working extremely hard." pic.twitter.com/GjO9RlK9A5

WHERE TO GET HELP