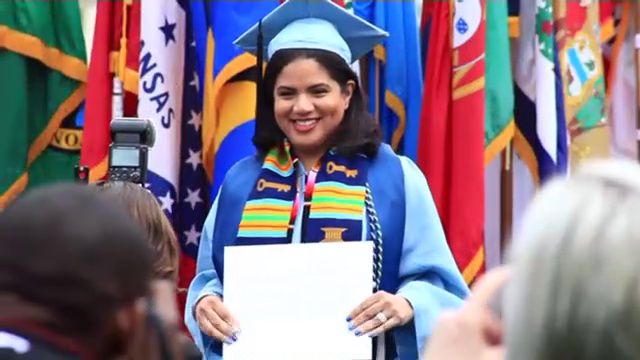 The only expectation Leyla Martínez had from applying to Columbia University was to teach her son Derek a lesson.

"I tried to demonstrate to him that he should never limit himself and always strive for the stars," Martínez said.

Three years later, on Monday, she graduated from the prestigious school with a degree in Human Rights.

"Never in my wildest dreams did I imagine ever being a Columbia grad," Martínez said.

Her achievement came after overcoming some obstacles.

More than a decade ago, Martínez served two years in prison after being convicted of credit card fraud.

"So this is a tassle topper that I ordered which kind of demonstrates, explains my journey from prison to the Ivy League, and I'm wearing it with pride," Martínez said.

It was thanks to Columbia's Center for Justice that the Bronx resident made her way into the School of General Studies on a full scholarship.

"The opportunity to get an education is the way of unlocking the potential of many of the people who've been locked out of the education system," said Geraldine Downey, Director of the Center for Justice at Columbia University.

Columbia's Center for Justice is committed to giving those currently or formerly incarcerated a second chance through college courses.

Martínez is the first student from the center to graduate.

"It's become almost imposible in our society for people like her to go on to make it after having made a mistake. I think that's the way our society wants it," said Carl Hart, Chair of Psychology at Columbia University.

Martinez wants to continue her education. She intends to apply to Columbia Law School and doesn't rule out a future in politics.

"I want to be directly involved in impacting policy changes that impact formerly incarcerated people, Latinos, every person of color and to change the world," Martínez said.

The school is taking applications and the first course is free.