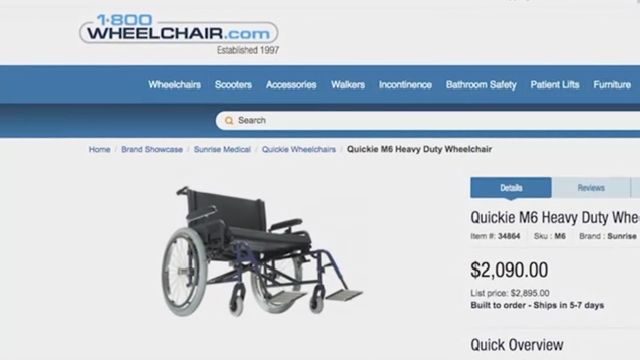 A look at the mounting complaints against 1800wheelchair

"It's frustrating for any of us, but I think when you're in your late 80s, it's just that much harder."

"But they could never tell me an exact day that it was out of the warehouse."

"The situation was so stressful," said Rehana Baluch.

Those were just three of the 75 customers across the United States and Canada who have filed complaints with the Better Business Bureau against 1800wheelchair.com since 2015.

With some help from a local non-profit, Rehana had purchased a wheelchair and accessories from the online company for her daughter Megan. The first time Megan sat in it, Rehana realized it was broken.

Rehana said she called 1800wheelchair right away, and the company never mentioned a return policy at the time. But the company told me that Rehana was outside the 14-day return window. The company suggested she take the chair to a technician to be fixed.

For Rehana, pursuing a repair while taking care of Megan was too much; the repair never happened.

Rehana followed up with the company. It took a year and more than 80 emails, but she finally got a refund for nearly $2,000 for the wheelchair and accessories.

"People have to stop and help families fix these situations, because they are so vital to our lives," Rehana said.

The Brooklyn-based 1800wheelchair has been in business for more than two decades.

In December of 2017, the Better Business Bureau revoked 1800wheelchair's accreditation for failure to respond to consumer complaints.

"That's pretty serious because that's like closing the door in your consumer's face," said Claire Rosenzweig of the Better Business Bureau New York. "It's not listening to what they're saying to you."

Last year in New York, only 10 businesses out of nearly 6,400 were stripped of their accreditation.

1800wheelchair's owner refused to sit down for an interview but did send a statement: "We here at 1800wheelchair strive to bring comfort and mobility to the disabled," the statement read in part. "We always want to do better. While we're not aware of any specific instances of customer disappointment, if you are, please have those valued customers be in touch."

"The wheelchairs are so critical to an individual like Megan and other family members that struggle on a daily basis," Rehana said.