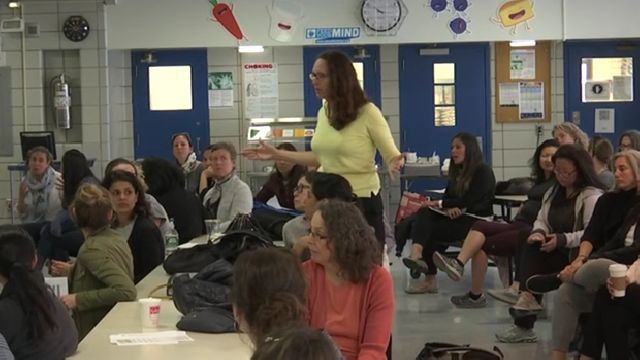 Emotions ran high with some parents at P.S. 199 on Tuesday over a proposed change in school enrollment that would make middle schools more diverse.

Some parents objected to a proposal to require each of the 17 local middle schools to reserve a quarter of its seats for students scoring below grade level on state English and math exams.

Some parents argued that high-performing students would be shut out of the most desirable schools.

"You're talking about telling an 11-year-old, 'You worked your butt off and you didn't get that, what you needed and wanted.' You're telling them 'You're going to go to a school that is not going to educate you in the same way that you've been educated. Life sucks!' Is that what the DOE [Department of Education] wants to say?" one parent said at the meeting.

Virtually all of the principals in district, and many of the elected parent leaders, support the plan. At two previous meetings, held elsewhere in the district, parents also generally supported the plan.

"District 3 currently has very segregated middle schools. The principals have expressed concern that under the blind ranking this may become more worse," said Kristen Berger of the Upper West Side Elected Parent Council. "So they are looking, and parents are looking, at mechanisms we can put into place to actually decrease the segregation and increase diversity across all of our schools."

But Tuesday's meeting was at P.S. 199, one of the city's whitest schools with many students from wealthy families, despite a desegregation plan adopted after a bitter fight two years ago.

A middle school principal told parents many of their comments upset him.

"There are kids that are tremendously disadvantaged, that I would love to be able to offer — somebody mentioned $5,000-worth of tutoring for to raise their test scores. And to compare these students and say, 'My already-advantage kid needs more advantage! They need to be kept away from those kids!' is tremendously offensive to me," Henry Zymeck, the principal of The Computer School, said to the parents at the meeting.

The superintendent will now decide whether to adopt the policy, which would make the Upper West Side district the first to enact a plan to make its middle schools more diverse.