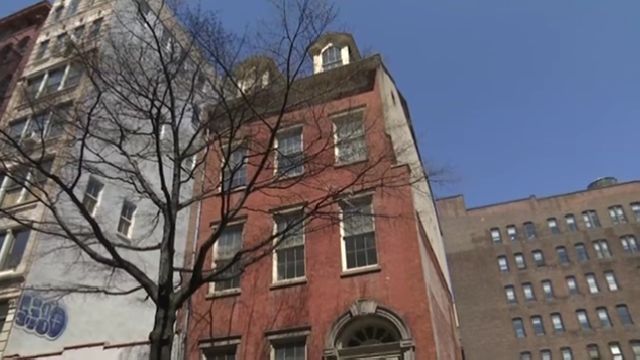 A landmark Manhattan home that has survived generations of change in the East Village is now in the crosshairs of developers. Preservationists warn it could be severly damaged - or even destroyed - if a proposed hotel rises right next door. NY1's Michael Scotto filed the fiollowing report:

It is a time capsule of wealthy life in New York. Everything about the 186-year-old townhouse at 29 E. 4th St. - its exterior, the interior, even the furniture - looks almost exactly as it did when its last private owner died in the1930s.

“It's a miracle. It's nothing short of a miracle,” says Margaret "Pi" Gardiner, executive director of the Merchant's House Museum.

But the present may finally be catching up with the past. For 82 years, the house has operated as the Merchant's House Museum. But a developer wants to knock down a garage and build an eight-story hotel next door.

Preservationists fear construction would severely damage - and possibly destroy - the townhouse, a city landmark listed on the National Register of Historic Places.

The house was built in 1832 and purchased three years later by Seabury Tredwell, a wealthy hardware merchant. His family lived there for 98 years until Tredwell's last surviving daughter died in 1933 and the building became a museum.

It is believed to be the only house left in the city with its 19th century interior fully intact. It attracts about 16,000 visitors a year.

“It is the only one. It's a lone survivor of old New York. It tells the story of the founding of the commercial emporium that New York became, for better or worse, and there's nothing like it,” Gardiner says.

The Landmarks Preservation Commission signed off on the proposed hotel in 2014.

But the Planning Commission and the City Council must approve a zoning change for the project to move forward. And the Council is unlikely to give the go-ahead without the backing of the local councilwoman, who sounds skeptical.

"Until the caretakers of the Merchant's House and its advocates are assured that adjacent construction will not affect this building, I cannot support the proposed development," Councilwoman Councilwoman Carlina Rivera said in a statement.