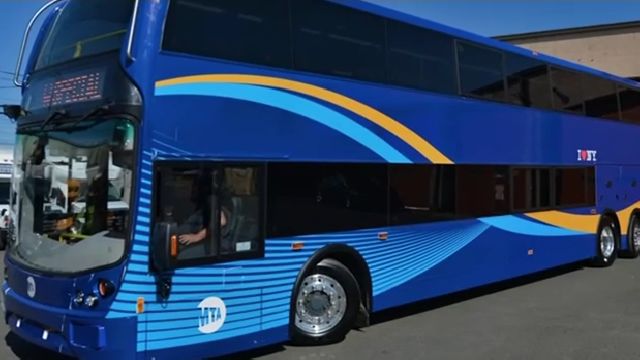 Double decker buses, an overhaul of routes, and a new way of paying the fare — they're all part of a massive new plan by the MTA to improve and modernize slumping bus service in the city.

Taking a bus in the city hasn't changed much over the years. Many routes still follow the paths of trolley lines that disappeared decades ago.

But that's about to change with the release Monday of a sweeping plan to overhaul MTA bus service.

"We want to completely review the way we run buses. To make sure that we get people from A to B quickly, so that buses become an attractive way to travel again," said NYC Transit President Andy Byford.

For years, as average bus speeds have slowed, an increasing number of New Yorkers have ditched riding the bus for other ways to get around - including app-based car services like Uber, making the streets even more congested.

"If we don't do anything, this city will achieve complete gridlock, it will grind to a halt. So we need to give buses a super efficient way of getting about, a fighting chance of getting through the traffic," Byford said.

One of the proposed changes - using double-decker buses to boost capacity.

The MTA will test double-deckers on an express route linking Staten Island and Manhattan, and try out an app that will allow express bus riders to check for seat availability on approaching buses.

"Not only will they know when their bus is coming, they will know if there is a seat available for them," said NYC Transit Senior Vice President Darryl Irick.

To speed service, the plan also calls for giving all bus riders, by 2020, the opportunity to pay the fare before boarding - and to board at any door, a system now used only on Select Bus Service lines.

"Paying here just makes it easier for everyone to get on instead of having everyone swipe," said one bus rider.

The plan will remap some bus routes and expand off-peak service, bus-only traffic lanes and routes that give buses priority at signals.

"These are the kinds of changes that will make buses faster and more reliable, and really get them to meet the needs of New York in 2018," said Transit Center Deputy Executive Director Tabitha Decker.

Advocates are praising the plan as ambitious unlike previous piecemeal efforts. But there's no pricetag on it yet.

"Major progress starts with leadership and strong goals and that's what we're seeing here. I think it's a reason to get pretty excited about what's to come," Decker added.

Byford's push to overhaul the bus network is a warmup to next month when he plans to release a report on reshaping all of New York City Transit, including subway, bus and para-transit service.