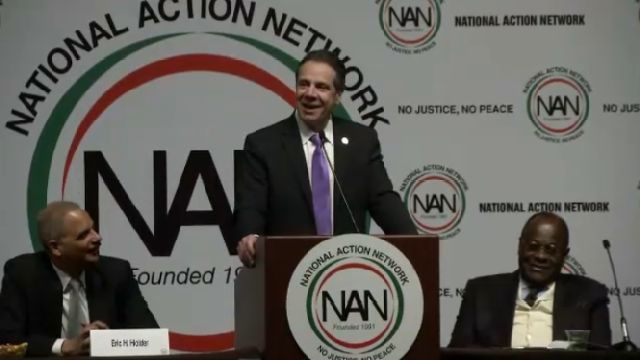 Gov. Andrew Cuomo on Wednesday issued an executive order to give all New York state parolees the right to vote.

It is unconscionable to deny voting rights to New Yorkers who have re-entered society.

Cuomo had an enthusiastic crowd already at the annual conference.

Then, he announced that parolees would be able to vote.

He made the announcement to a crowd of influential African-American leaders, as Cynthia Nixon, his Democratic primary opponent, is already heavily courting African-Americans as she seeks to topple Cuomo.

For Cuomo, being the incumbent has advantages. He is following Nixon's entrance by checking off a left-wing wish list.

And what Sharpton said introducing him has Cuomo's campaign giddy:

"We don't want people talking about they're progressive and can't show us no progress," he said. "We want you to show your progress by what you do when we go home."

A number of high-profile political figures from across the nation are expected at the convention over the next couple of days. Nixon, however, is not listed in the program.

In a statement, Nixon said that for eight years, Cuomo governed like a Republican: "We don't buy the Governor's new song-and-dance routine. Voter suppression in New York should have ended eight years ago, from the rights of parolees to access to early voting and automatic registration."

The governor said the state's current law makes it hard for parolees to properly re-enter society.

"You did your time, you paid your debt, you're released. But you still don't have a right to vote. At the same time, we're saying we want you a part of society, we want you to get back into the community," Cuomo said.

The governor presented legislation earlier this year that said parolees should have right to vote, but it was knocked down in the state Senate.

"It helps for a successful re-entry," said Myrna Perez of the Brennan Center for Justice. "If we want people to be productive and engaged members of society, we need to make them stakeholders, and we need to give them opportunities to give back to their community, and voting is one of those ways to do that."

Even Mayor Bill de Blasio paused feuding with Cuomo with a thumbs-up:

This is a great move. https://t.co/CaYbmGQwC2

But State Senate Majority Leader John Flanagan said that by bypassing the legislature, Cuomo could face a lawsuit.

"I frankly can't believe we're even having a discussion on a subject matter like this," the Republican said. "This will allow rapists and murderers to be given voting privileges that they don't deserve and they shouldn't have."

Appearing later in the day on NY1, Cuomo said he believes he's on solid legal ground.

"I get sued almost on a daily basis," the governor said. "If we don't get sued, it's probably a slow day."