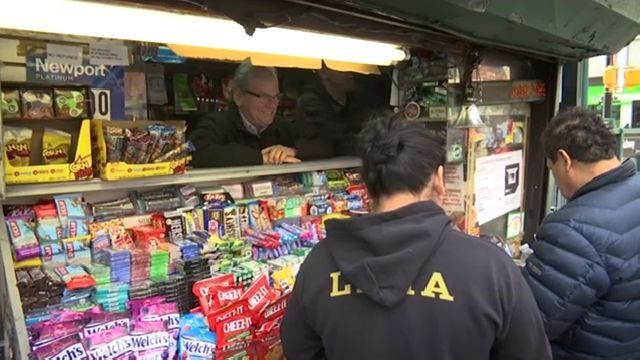 Bernard Uhlfelder has operated this newsstand on Lexington Avenue and 86th Street since 1972.

Back then newspapers were piled high waiting to be sold. But now the papers and magazines are pretty much gone, and so is a lot of his business.

"The Internet has killed everything. Let's face it, who reads the paper now - you just pick it up on your phone and there it is," Uhlfelder said.

Uhlfelder says he now makes 20 percent less than he did in the 1980s, largely because of cratering newspaper sales. He says he would sell 600 copies of the Daily News every day - and just 40 today.

Mike Patel knows the numbers all too well. Twelve hours a day he stands in his tiny newsstand on Chambers and Broadway.

If not for tourists buying water and soda and sales of lottery tickets, Patel and some other newsstand operators do not know if they would still be in business.

Like many operators, Patel emigrated from India and saw newsstands as a path to the middle class.

Patel and his wife, who once ran her own stand, were able to buy a home in New Jersey.

But Patel doesn't think he would have such success if he were starting out today.

"Before it was a different story. Now it's not that easy to make that kind of money," Patel said.

The business peaked in the 1950s with 1,500 street-level newsstands.

Now there are just 329 left, though the number has grown a bit since the Great Recession a decade ago.

Under city law newsstands cannot sell anything priced more than $10. Nor can they sell clothes, jewelry, handbags, hair-care accessories or food that's not packaged.

Newsstand advocates say the newsstand experience needs to change so operators can survive. One idea is to allow for the sale of food, such as coffee or donuts.

"The more things that we can quickly deliver to our fellow New Yorkers without the hassle of having to go into a brick-and-mortar store, the better. So I think the next step is food," explained Max Bookman, a lawyer for New York City Newsstand Operators Association.

But City Council approval appears unlikely because of opposition by traditional stores and street vendors who hold costly city permits.

Another idea facing opposition: Allowing the operators to share in the revenue from ads on the newest stands.

"Something has to be done to keep it alive or else there will be no reason for the newsstand to be on the street," Uhlfelder said.