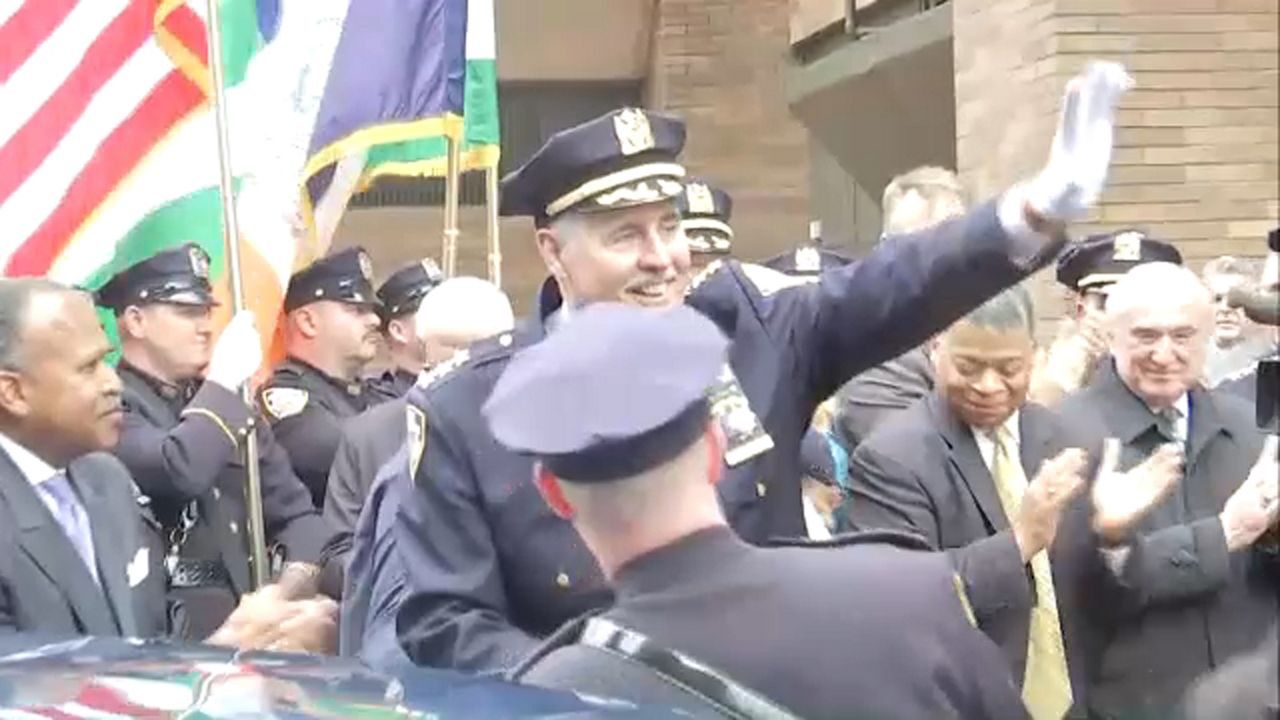 Chief of Detectives Robert Boyce, joined by his wife and children, received a final salute Monday afternoon as he ended a 35-year NYPD career.

"Bobby Boyce is one the reasons why this city is one of the safest in country. His leadership, his knowledge in regards to crime and the direction he gave his troops, is why we're in the shape we are today," said NYPD Chief of Patrol Rodney Harrison. "It's a tough loss, but we'll find a way to keep going and keep his legacy going."

Before his walkout, Boyce took NY1 back to the 24th Precinct on the Upper West Side, where it all began.

"I remember being turned out of the floor downstairs into a very different city in 1983. And you would go out into the patrol, and the precinct was a lot different than it was now," Boyce told me. "I could remember with clarity, seeing narcotics transactions going down, and recovering vials of crack, and saying to my partner on Amsterdam Ave., 'Geez, Mike, I wonder what these are?' The city changed overnight."

Boyce spent much of his career in leadership roles, with stops overseeing the detectives in the 75th Precinct in East New York and running the gang division.

Then-police commissioner Bill Bratton named him chief of detectives in 2014, putting him in charge of all the detective squads and elite units like the Bomb Squad.

His experience fighting gangs was especially helpful in drafting a strategy to reduce shootings.

"We went after the gangs in 2015. We drilled down on them because they were the ones who were creating all the shootings. It was the number one motive for shootings in New York City after 2015," Boyce said. "So we sat down at headquarters, we came up with game plans."

The 6-foot, 4-inches-tall Boyce emerged as a visible spokesman, talking about the city's biggest crimes, such as the murder of Karina Vetrano, who disappeared while jogging in a Queens park in 2016.

"You have to have someone telling the folks out there exactly what we know now and what we're doing about it," Boyce said. "I think it's important to take the air out of something so there's no fear on the street."

Boyce said credit belongs to the police in the streets.

"They're out there, working 24/7 out on a cold night or whatever the case may be. They are the ones bringing the product," Boyce said.

Although he reached the NYPD's mandatory retirement age of 63, Boyce hopes to continue in policing. He was considered for openings heading the Nassau and Suffolk County departments.

"I'm not sure the rest of the country enjoys the same crime reductions we have in the city," Boyce said. "I would love to go out and help other cities and towns, whatever the case may be, and kind of talk to them how we are able to turn things around."

The current chief of crime control strategies, Dermot Shea, will take over as chief of detectives on Wednesday.