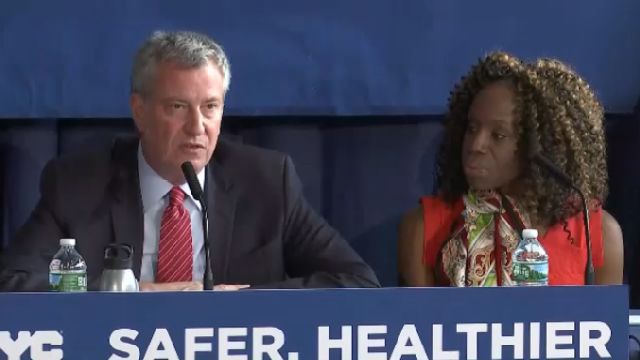 After months of scrutiny, the embattled chair of the city's public housing authority is stepping down.

The official announcement of Shola Olatoye's resignation came Tuesday morning during a tour of a public housing complex with Mayor Bill de Blasio in Far Rockaway.

She served as the leader of NYCHA for the last four years.

"I have taken such pride in serving the 1 in 14 New Yorkers that we house at NYCHA," Olatoye said.

In recent months, Olatoye has found herself at the center of several controversies, beginning with the revelation in the fall that she certified that lead paint inspections had been done in NYCHA units over a four-year period, when she knew that they had not.

She was also grilled over the cold this winter, as four out of five public housing tenants in the city lost heat or hot water as aging boilers broke down.

For months, there have been calls for Olatoye to step down.

"Yes, we have identified some unacceptable shortcomings in our operations," Olatoye said Tuesday. "For residents to be uncertain about possible lead paint hazards in our homes or unable to stay warm on the coldest days of winter, it unnerves me that we have failed here. It is a sign, though, of the real struggles that NYCHA faces."

De Blasio said he did not ask for her resignation. In fact, he said Olatoye offered to leave many weeks earlier but he turned her down.

"I want to say thank you to Shola, because it was not an easy mission, and it was certainly a thankless mission, but it was a crucial mission, and 400,000 people benefitted," the mayor said.

Stan Brezenoff will step in as interim chair of NYCHA. He is the former head of New York City Health + Hospitals.

"Big bureaucracies are hard. I've done a few," he said at the Far Rockaway press conference.

There is no word at this time on how long Brezenoff will lead the public housing authority on an interim basis. De Blasio said he will conduct a nationwide search for a permanent chairperson.