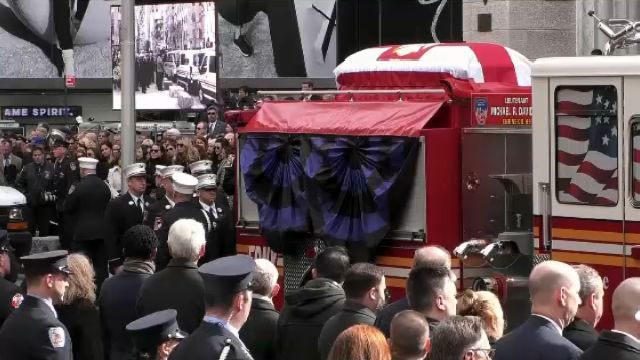 A city firefighter who was killed in the line of duty last week was remembered by thousands on Tuesday morning during a somber funeral mass in the heart of Midtown.

Firefighters from across the city, state, and nation gathered at St. Patrick's Cathedral to pay their respects to Lt. Michael Davidson.

The 15-year FDNY veteran died of smoke inhalation after getting separated from his team when he entered a burning building in Harlem last Thursday.

The most poignant words were from Davidson's brother Eric, known as EJ, who, like their father, is also a firefighter. EJ said the massive cathedral was an appropriate place for his brother's farewell.

"I just couldn't think of a better way to send him off, to shut down Fifth Avenue in the greatest city in the world and let the city and the people of New York and the entire country say to themselves, 'Wow, this guy must be important.'" EJ Davidson said. "And still, that would be the understatement of the century."

Mayor Bill de Blasio and Fire Commissioner Daniel Nigro were both in attendance and recalled Davidson's dedication to the job.

The 37-year-old came from a family of firefighters.

"Helping others is the family business for the Davidsons. And Mike knew at a young age that he wanted that career and he entered the department at age 22. But his love of this career was not only about fighting fires; it's about the comradery and the family that this job offers you," said Nigro, who pledged to Davidson's wife, Eileen, and her children that the department would stand behind them.

Colleagues who spoke with NY1 became emotional reminiscing about Davidson's love for his children. Davidson leaves behind a wife and four children.

It is still not confirmed what sparked the fire at the building in Harlem on Thursday.

The widow of Davidson, while holding one of their four young children, was presented with his helmet from Engine 69 in Harlem. It was just one of the emotional moments during the funeral services.

A fire truck draped with bunting carried Davidson's coffin from Long Island for his journey, with the hero firefighter receiving a final salute from overpasses and by a fireboat on the East River.

Thousands of fellow firefighters lined Fifth Ave. for blocks as the procession pulled up to St. Patrick's Cathedral, where Cardinal Dolan celebrated the funeral mass for the Queens-native.

Firefighters, friends, and family were not the only people who attended the funeral services. Actor and former firefighter Steve Buscemi and neighbors like Calvin Hunt, who said Davidson will be missed in Harlem, were also on-hand.

Lisa Harris was a background actor on the production inside the building when the fire started. She also felt she had to attend Tuesday.

"The whole purpose of him being there was to save everyone in the building," she said.

And Michael Davidson sacrificed his own life to do that, doing a job that he loved.