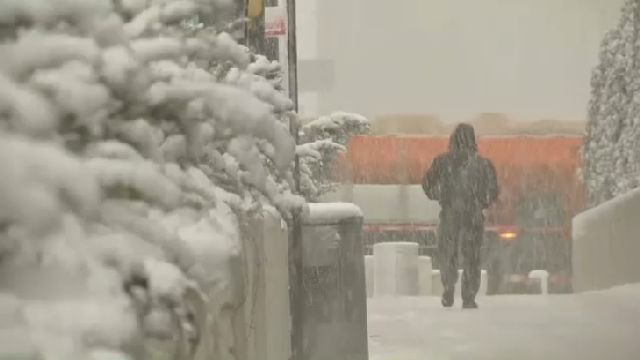 The fourth nor'easter of the month hit the city Wednesday and created a slick and snowy evening commute.

A winter storm warning is in effect for all of New York City until 10 a.m. Thursday.

Few updates: Some neighborhoods breaking into the double digits. Awaiting a possible record at Central Park. The record for the day is 7.1 inches. Oh, and sorry Bed-Stuy residents, I had a typo on an earlier tweet. pic.twitter.com/za61bYnfF0

The snow was expected to continue overnight before tapering off to flurries and snow showers by sunrise.

Governor Andrew Cuomo declared a state of emergency in the city as the state ramped up its efforts to prevent power outages.

Cuomo also reassured customers that utility companies will stay ahead of the storm to prevent widespread outages.

"They have all assured us that they learned from the last storm," the governor said. "They're more personnel, there's more equipment in place, they're in a better position to handle this emergency. But do I have 100 percent confidence? No, because I have been told this before. And I'm going to be in contact with them all through the day today."

The Mayor has made the decision to OPEN schools tomorrow. The great women and men of @NYCSanitation will be working around the clock to make it happen.

Alternate-side parking rules have been suspended citywide through Thursday.

LaGuardia Airport said at approximately 2:15 p.m. Wednesday that all remaining flights at the airport were canceled for the rest of the day.

Airlines have cancelled all remaining flights for today at #LGA due to the Nor’easter affecting the region. Please contact your carrier for more details on rebooking cancelled flights.

Until we have more significant changes to report, enjoy these photos of #JFK’s Snow Removal Crew in action! pic.twitter.com/4hVJDlzbAQ

Both airports say there are already several cancellations for Thursday as well.

Tomorrow will be a recovery day for airlines at #LGA. There are over 150 cancellations, mostly due to aircraft that weren’t able to arrive today. Please check with your airline before coming to the airport in the morning. We're aiming to get back to full speed as day proceeds.

Tomorrow is a recovery day for airlines at #JFK. There are more than 90 cancellations Thursday (8% of the normal daily schedule). Please check with your airline before coming to the airport tomorrow. We're aiming to get back to full speed as the day progresses.


Passengers should check with their individual carrier before heading to the airport.

Most Port Authority Bus Terminal carriers were also suspended due to the storm.

The authority says bus service out of the terminal will resume Thursday.