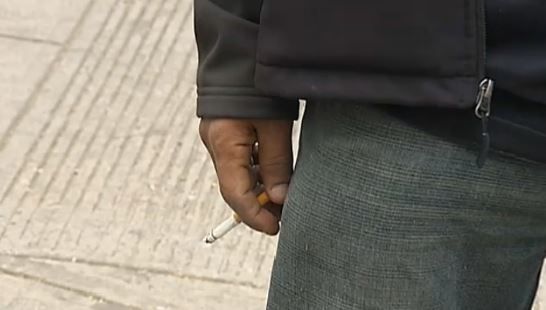 Proposed bill would ban smoking while walking in NYC

It's illegal in restaurants, bars and stores. And soon, smoking cigarettes could be banned on city sidewalks, too.

That's if Queens City Councilmember Peter Koo gets his way. He has introduced legislation banning smoking while walking.

"Too many times, when we are walking, we get stuck behind somebody with smoke, and you have to inhale all the secondhand smoke, and it's terrible for your health," Koo said.

The ban also would apply to smokers walking along street medians and public plazas. However, simply standing outside and smoking would still be OK.

The bill only targets smokers who walk because they subject other pedestrians to secondhand smoke.

Some New Yorkers back the proposal.

"That's defintely a step in the right direction," said one New Yorker. "Even with parks and open spaces, they started that ban, and it seemed to work well. I mean, people were annoyed at first, but everyone just gets used to it, and it becomes the new normal, and then, eventually, you'll see a dramatic decrease in smoking."

Others, though, say the legislation goes too far given how few places are left in the city for smokers to legally light up.

"Well, I think smoking is bad for you and for the public, but if people want to smoke in public streets, I don't think that that's necessarily a bad thing," said one New Yorker.

"I think it's not a good ban because it's eliminating people's right to smoke. They're getting boxed into a corner a little bit right now," said another. "It's a little bit of a precious law, and I don't think anyone could observe it. How could you ever enforce something like that?"

The city banned smoking in bars and restaurants in 2003, and in parks and beaches in 2011.

Koo says those caught smoking and strolling would be fined $50, the same penalty for park puffers.

"We all share the same sidewalks, the public spaces, so we hope that they can give us the courtesy. When they want to smoke, they smoke standing in a corner, so when we see them, we can bypass them," he said.

After the bill is officially proposed Thursday, it will be sent to a council committee for a public hearing, where it eventually will face a vote or go up in smoke.