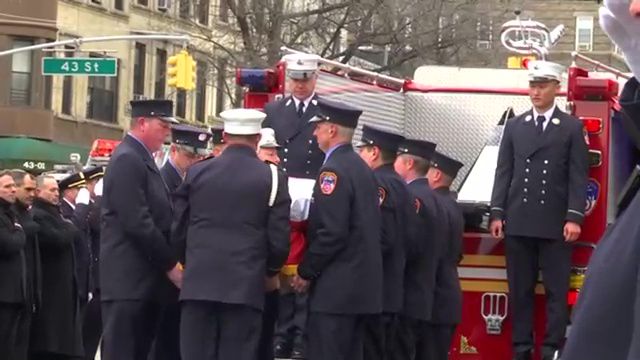 Firefighter Thomas Phelan lived in Sunset Park, Brooklyn, his entire life. And on Tuesday, it was where his funeral was held.

The 45-year-old died on Friday from lung cancer blamed on exposure to the toxic fumes and dust he inhaled on September 11th.

"He really was the best of us," said friend Bryan Lang. "Thomas, he's going to leave a void that will never be replaced in our lifetime."

Phelan was most recently a pilot of the fireboat Marine 9, based on Staten Island. On Sept. 11, 2001, he was a captain of a Circle Line ferry taking tourists to and from the Statue of Liberty when terrorists flew airplanes into the World Trade Center. He then helped to evacuate hundreds of people from Lower Manhattan and ferried rescue workers and supplies to the smoldering wreckage of the Twin Towers.

"When everybody was trying to get away, Thomas got that boat in position to help and evacuate," Lang said. "And what's great is that he never talked about it. You would never ever know what Thomas did."

Phelan went on to join the FDNY in May 2003 and was diagnosed with lung cancer just two months ago. According to officials, he's one of three firefighters to die from World Trade Center-related diseases this week alone.

According to the FDNY, more than 170 firefighters have died from 9/11-related illnesses. The Centers for Disease Control says thousands of people have been diagnosed with cancer linked to that deadly day.

"We have a constant reminder of people dying from World Trade Center. People say 'never forget.' We can't," said Gerard Fitzgerald, president of the Uniformed Firefighters Association. "We get a daily reminder of everybody that's sick, in hospice care, and then dying, so it's sad."

But many of those who knew Phelan believe he wouldn't want anyone to be sad. They said the avid cyclist and marathon runner would be humbled by the hundreds of first responders, friends, family and FDNY officials who turned out Tuesday to honor and remember him at St. Michael's Church.

"It's amazing," said Peter Lavezzo, a sergeant with the NYPD Joint Terrorism Task Force. "He would probably think it's too much and he'd be like, 'What's this commotion?' with a big smile, but it's a true testament to his character. A family man, just a great friend."

A family man, a great friend -- and a true hero.