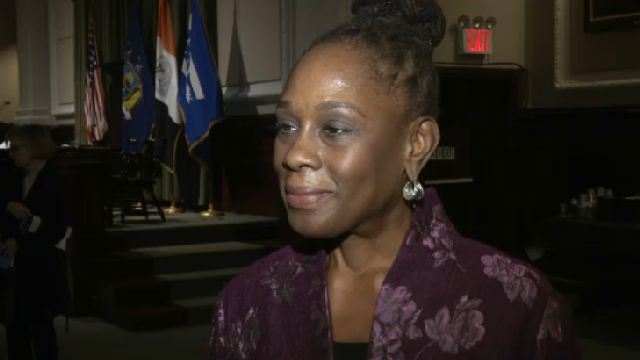 She shared the news exclusively with NY1's Courtney Gross on Monday night.

McCray: I want to serve with distinction, I want to do the very best job I can at what I am doing right now. I want [ThriveNYC] to be successful more than anything, and that's going to be where I put all of my intention, and then figure out what comes next."

Gross: To run for something?

McCray has the biggest role New Yorkers have seen from a First Lady in years, maybe ever. Her comments Monday night came as McCray steps up her public appearances.

Within the last month, she has appeared beside the mayor as he announced the appointment of a new deputy mayor and the new schools chancellor.

That visibility has raised some questions.

NY1 also asked her about the recent controversy over her role at City Hall, where some have wondered whether it is outsized since no one elected her. She told NY1 the mayor wants her to be there.

"Well, no one did elect me, but the mayor chose me and wants me to serve as an adviser, and it's something that I want to do as well. I have something to give. I have skills to contribute, and why shouldn't I?" said McCray. "He asks me to be on the interviews. I have a different perspective often on people on policy. I bring a different perspective to the table, and I think he likes to hear my opinions."

As for the run for office, she did say she won't be running for mayor, but she does think the current mayor would like her to run for his current job.

On Tuesday morning, she held her own press conference, unveiling a new initiative for mental health care in Puerto Rico. She said she would fly to the island that afternoon.

But quickly the topic turned to her political future.

McCray is taking a step out on her own, but she immediately was at odds with her husband over whether she should be paid for her work at City Hall — something conflicts of interest law prohibits.

"Two people who have been doing this work for a long time, I find it strange she is not allowed any compensation," de Blasio said last week.

"I asked him today when he called me, like, 'Why did you say that?' And I didn't really get a good answer. I have no idea," McCray said during her press conference on Puerto Rico. "We're close. Yes, I am one of his advisers, but sometimes husbands say things, and I have no explanation for why he brought that up."

Divided over this, but McCray still thinks the mayor would support her foray into campaigning, should she decide to make a run for it.

"I think he would love it if I did," she told me Monday night, laughing.

We asked whether this was all part of some coordinated rollout, an attempt to float her potentially candidacy to a larger audience. The First Lady said no. Of course, some may see it differently if her name ends up on a ballot in three years.