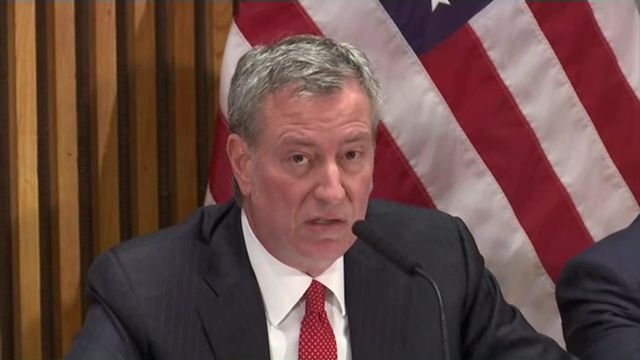 Mayor on driver involved in crash that killed two children: 'I wish she was under arrest right now'

Mayor de Blasio says the driver who struck and killed two young children in Park Slope on Monday should be in jail. And he says he will propose changes to state law to make it easier to keep motorists with bad driving records or potentially dangerous medical conditions off the road. NY1’s Bobby Cuza filed the following report:

“Something is wrong with our laws that we need to fix,” Mayor de Blasio said.

Wednesday, it was clear the car crash that killed a 1-year-old boy and 4-year-old girl near the mayor’s Park Slope home had touched a nerve.

The woman behind the wheel, Dorothy Bruns, suffered an apparent seizure; she reportedly had multiple sclerosis and other health issues. The NYPD says her car previously had been issued eight summonses for running red lights and speeding – violations documented by cameras.

“She should never have been allowed to be driving a car after what we know of these other violations. I share the frustration of many in my community. I wish she was under arrest right now,” the mayor said.

Whether charges are filed is up to the Brooklyn District Attorney. The NYPD says investigators obtained warrants and are reviewing her bloodwork and cell phone records.

Police have also interviewed witnesses and Bruns, who spoke to investigators both at the scene and at the hospital.

“There was an investigator who indicated that the individual might have been foaming at the mouth,” said Thomas Chan, the NYPD’s chief of transportation.

The mayor and police officials said the NYPD’s hands are tied in doing something about drivers like Bruns whose cars repeatedly are cited for speeding or running red lights as a result of traffic cameras. That’s because the cameras identify the car, but not necessarily the driver.

One idea floated by the mayor is seizing the cars of such repeat violators, but that would likely require changing state law.

De Blasio, who on Tuesday spoke to protesters seeking street safety changes, also said he wants better regulations that would keep drivers with potentially dangerous medical conditions off the road, and subject them to penalties for ignoring those conditions and driving.

The DMV says it has such a program; one issue is doctors’ concerns about patient confidentiality.

“If you might not be able to drive a car, and you might kill another human being by accident, don’t get behind the wheel to begin with,” the mayor said.

De Blasio said he’d put forth specific ideas next week, likely in the form of proposed state legislation… no easy lift for a mayor whose proposals are not always well-received in Albany.