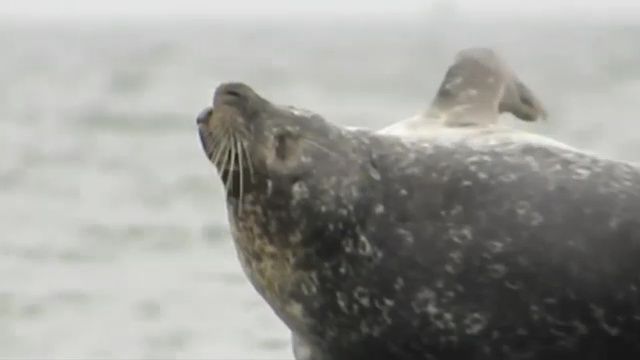 Hundreds of seals are now calling the waters around NYC home

This is Arden Beach, a rocky stretch of sand on Staten Island’s south shore.

You don’t find many people here, certainly not in the winter. But that’s not to say there are no visitors.

"Now, there's three out there," said resident Pat Banks. "And two of them are enormous. They're really, really big."

Seals were first spotted here 10 years ago and have become increasingly common. They also have been turning up in the waters along Sunset Park in Brooklyn, Far Rockaway in Queens...and Pelham Bay in the Bronx, usually from November through May, often sprawling out on rocks like this one, basking in the sun during low tide.

"They like to perch on the rocks. And they don't come too much in to the shore...but you can see them."

And take pictures of them. Photos and videos have been making the rounds on social media.

One Facebook user shared up-close footage with NY1. The harbor seal appears to wave and then look right at the camera.

"There's more and more seals," said Paul Sieswerda, the president of Gotham Whale, a nonprofit organization that tracks marine life in the New York area. "The population of seals up north is really quite large, and so they're expanding down to the southern areas during the wintertime, and that's what we're seeing."

Sieswerda estimates there are about 300 seals here, the population growing because of ample food supply, waters that are the cleanest in decades and the Marine Mammals Protection Act, which makes it illegal to come within 100 yards of a seal.

"Seals on Staten Island is actually probably a very old thing, but they were hunted out from this area as they were up north, and now the population is returning. So now they're returning more and more to their native habitat," he said.

That means more and more people will try to catch a glimpse of the seals as they belly up in the sun.

Sieswerda cautions not to disturb them, for your safety and the safety of the seals. He's encouraging anyone who sees one to email him at paul@gothamwhale.com so he can add the sighting to his database.