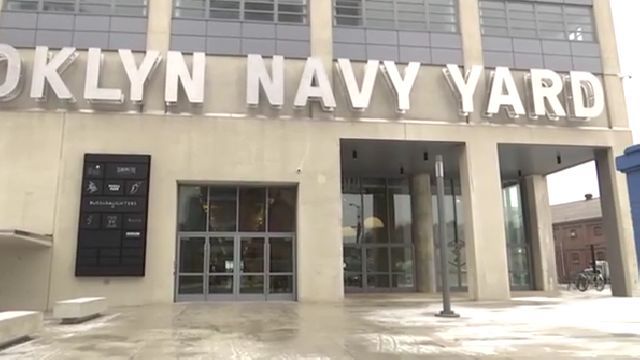 For decades the Brooklyn Navy Yard sat dormant. Once a mecca for wartime ship building, it's on a voyage to become a billion dollar technology hub.

"We kind of looked out to the next 20 to 30 years and said what's next for the navy yard? And tried to charter a really ambitious plan for ourselves," said Brooklyn Navy Yard President/CEO David Ehrenberg.

Ehrenberg heads the Brooklyn Navy Yard Development Corporation - a not for profit organization overseeing the development of the yard which is now owned by the city.

"Cities need middle class jobs and they need them desperately and we think we provide a huge need in providing a home for those kinds of companies," Ehrenberg said.

A renovation costing $180 million is complete, allowing the one million square foot building to become - it is hoped - the gateway to the yard.

"It's creating a unique opportunity within the yard to have the public come in, to have a space for businesses for mix and mingle and for that unique energy of New York," said Brooklyn Navy Yard Development Corporation Executive Vice President Claire Newman.

Admiral's Row is undergoing a $140 million renovation. When it's done, a Wegman's supermarket will anchor the space. And on Dock 72, a 675,000 square foot development is supposed to become home to 4,000 tech jobs.

"With this phase of development, we've completed rehabing all of our existing buildings," Newman added.

Next up is a plan to build massive vertical manufacturing facilities from the ground up.

Ehrenberg says those buildings have the potential to be a model for urban manufacturing nationwide.

"Most manufacturing around the country happens out in a green field somewhere, one floor, not using the land terribly efficiently and not connected to other industries," Ehrenberg said.

But most importantly, it's keeping in line with the yard's rich history of building in Brooklyn.