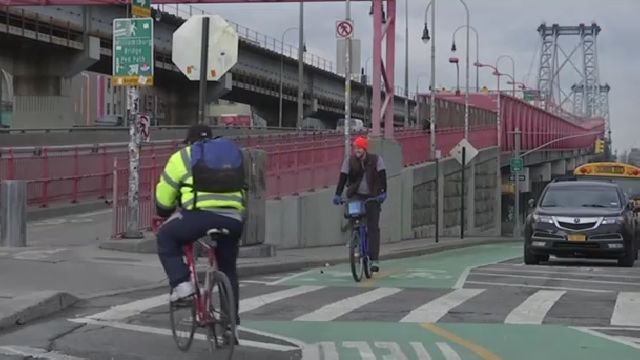 Hundreds of thousands of L train riders will be needing new ways to get around once the line is shut for 15 months of repairs. The city will be encouraging many of them to get on bicycles. Transit Reporter Jose Martinez has more.

The Williamsburg Bridge is already the busiest East River crossing for cyclists. Close to 7,600 people pedal over the bridge between Brooklyn and Manhattan every day.

But when the L train's tunnel under the river closes for 15 months of repairs, the number of cyclists is expected to surge.

"Some of our numbers are showing up to triple the amount of cyclists based on what we saw during Sandy. So knowing that, we really need to make sure we're creating a network that can handle those cyclists," said DOT Senior Director Sean Quinn.

It calls for expanding CitiBike operations and adding bike lanes in Brooklyn and Manhattan.

"We're looking at all these points where we think cyclists are going to be entering the city and transferring off the L to other modes and making sure that the cycling connections are robust," Quinn said.

The MTA and the city Transportation Department expect that 80 percent of the nearly 300,000 L train riders displaced by the shutdown from Bedford Avenue in Brooklyn to 14th Street and Eighth Avenue in Manhattan will shift onto other subway lines.

And after adding a record 25 miles of bike lanes this year, the city will create more near 14th Street - which the L line runs beneath in Manhattan.

"I think it's going to be pretty transformative," said DOT Commissioner Polly Trottenberg.

While 14th Street will be turned into a bus way during the rush hours, on 13th Street the city is proposing the creation of a two-way protected bike path.

After Hurricane Sandy, when the L's East River tunnel was closed for 11 days because of flooding, cyclists flocked to the Williamsburg Bridge and other East River spans.

"I was here for Hurricane Sandy and the whole bridge was packed with people. And we all kind of, in unison, it's pretty easy to get across whenever there's traffic," said one bike rider.

Companies are also looking at cycling as a more viable commuting option during the shutdown.

"We're already fielding a lot of interest from major employers who want Bike New York and TransAlt to come in and help train their workforces on how to bicycle safely and effectively, how they might actually purchase bulk lots of bicycles for their staff, instead of buying Ubers," said Transportation Alternatives Executive Director Paul Steely White.

As on-the-move L train riders are forced to find new ways to move.