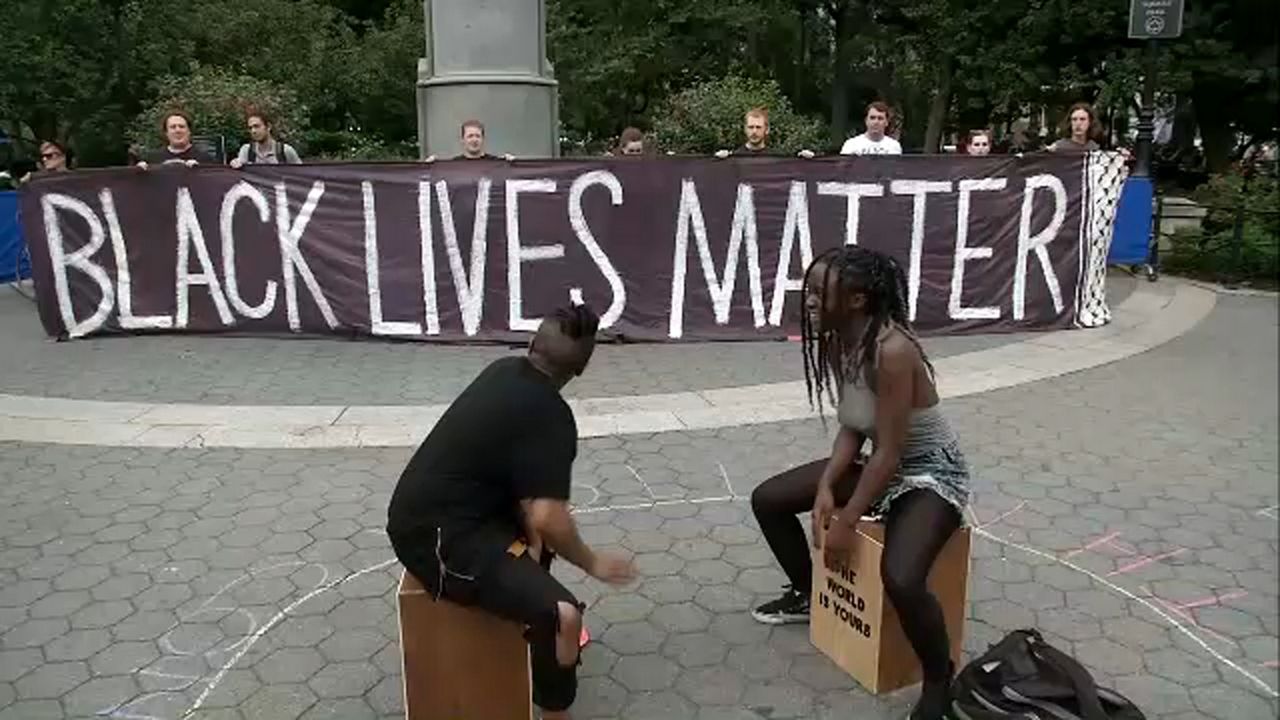 Protesters in Union Square rally against violence in Virginia

More than 100 people gathered in Union Square on Saturday to protest the events at demonstrations in Charlottesville, Virginia.

Rally organizers asked people who attended to talk to friends about acceptance in the wake of the Charlottesville protests.

Sarah Holdren, a Charlottesville-native, was also there and said recent events in her town sickened her.

"This horrific event has been on my radar ever since they've been planning it," Holden said. "I've been checking in with my family and friends, and it's not only sickening to see what's happening; it's also massively disheartening to see some of the way the city's leadership and law enforcement is handling it."

One man who expressed an opposing opinion during the Union Square rally was shouted down, but the rally has remained nonviolent through the early evening.

Just a few hours before the Manhattan protest, with the Charlottesville rally already turning violent, a car plowed into a crowd of people peacefully protesting white nationalists rallying in the Virginia city.

The car killed at least one person and injured dozens of people, according to officials. The driver was later arrested.

A helicopter crashed near Charlottesville later Saturday, according to police, killing the pilot and a passenger.

Officials said it has been linked to the white nationalist rally. It was not immediately clear how the crash was connected to the rally.

A helicopter crashed near Charlottesville later Saturday, according to police. It is unclear if there was any link to the rally.

The chaos boiled over at what was believed to be the largest group of white nationalists to come together in a decade: the governor declared a state of emergency, and police dressed in riot gear ordered people out.

The white nationalists had gathered to protest plans to remove a statue of Confederate Gen. Robert E. Lee.

Counter-protesters were present as well, leading to clashes. The turbulence began Friday night, when the white nationalists carried torches though the university campus in what they billed as a "pro-white" demonstration.

But some of the white nationalists cited Trump's 2016 election victory as validation for their beliefs, and Trump's critics pointed to the president's racially tinged rhetoric as exploiting the nation's festering racial tension.

Many officials also criticized the president for claiming that hatred has been "on many sides."

We will continue to fight against the deep-seated racism that exists in our country wherever it appears. https://t.co/dWhKhuu8gW

No, Mr. Trump – there are not many sides to hate. pic.twitter.com/NEBoO4PUaV

Of course we condemn ALL that hate stands for. Until @POTUS specifically condemns alt-right action in Charlottesville, he hasnt done his job

Mr. President - we must call evil by its name. These were white supremacists and this was domestic terrorism. https://t.co/PaPNiPPAoW

Very important for the nation to hear @potus describe events in #Charlottesville for what they are, a terror attack by #whitesupremacists

The president did not mention or condemn the white supremacists directly in his press conference, and he did not describe the car crashing into protesters as an act of terrorism. Many people have in the past denounced cars plowing into people as acts of terrorism, such as in July 2016 when a truck drove into a crowd celebrating Bastille Day in Nice, France, killing dozens of people.