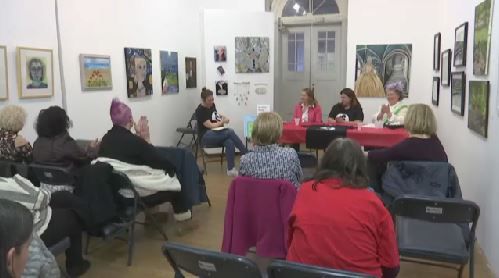 Portraits of women line the walls of the Art Lab in New Brighton.

"We don't get the type of exposure that we should, or I don't think that we do, female artists,” Lynnanne Daly, the executive director of the Art Lab said. “So anything that brings us into the spotlight a little bit brings awareness that there are fantastic women's artists out there."

Daly hosted this year's Swan Day event called the March Chronicles. It was a panel featuring both artists and women who particiapted the March on Washington this winter.

Elaine Mendez is with the collaborative art group "Labrynth" and runs Swan Day Staten Island. She said the only way to make change is through dialogue.

"What we're going to do is bring together their insights into their experiences during those marches and what they walked away with and offer solutions into roadblocks that women artists are facing now with changes in legislation,” she said.

Panelist Vivian Vassar dressed as a suffragette to get her message across.

Even though this particular event is about women artists, according to organizers the problem lies much deeper.

"In our own government there's many many more men making decisions that affect women,” Daly said. “So who knows what would happen if you see an equal footing of females in those positions, say in Congress or in the senate?"

This was the fourth year there has been a SWAN Day event on Staten Island.