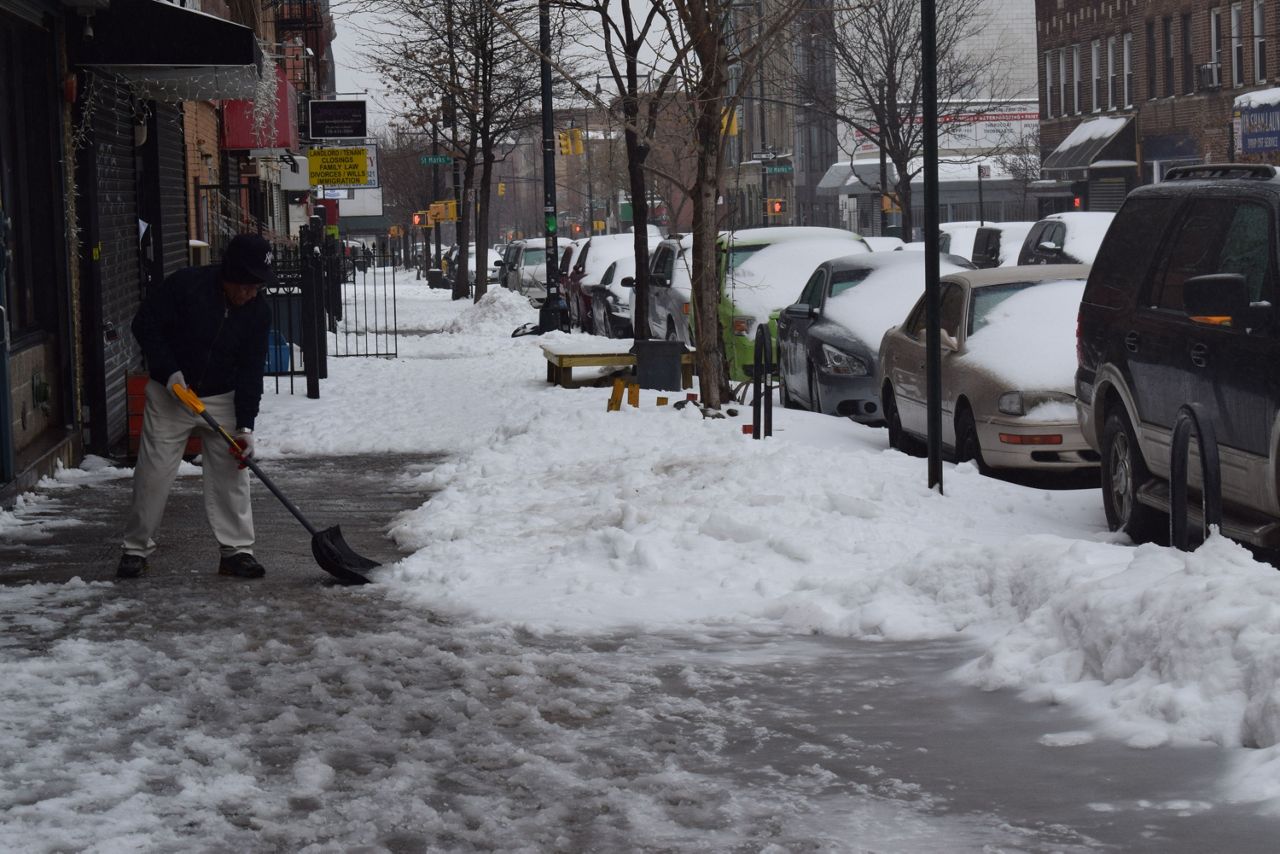 New Yorkers are digging out from the snow, as the winter storm passed through Tuesday with a weaker impact on the city than expected.

Above-ground MTA subway service was restored 6 p.m. after it was shut down 4 a.m.

Express subway service in the city is projected to begin Wednesday by 7 a.m. or earlier on all lines.

City buses are running with reduced service but are projected to be back to normal at 5 a.m. Wednesday.

Limited Metro-North service was restored 6 p.m. Tuesday and ran until 11 p.m. on the Hudson, Harlem and New Haven Lines, although there will be no branch service. Full service will resume Wednesday morning on a regular weekday schedule.

Staten Island Railway service has been restored. Long Island Railroad service is running on a normal schedule with scattered delays.

The storm's more westward track was just enough to raise temperatures so that New Yorkers saw more sleet than snow.

Snowfall from the nor'easter has ranged from 4.7 inches at JFK Airport to 7.2 at Central Park and LaGuardia Airport. Original weather models called for at least eight inches of snow across the city.

By Tuesday night, the storm had moved away from the city, and temperatures are anticipated to plunge into the mid-20s by Wednesday morning. This will lead to many icy spots for the Wednesday morning commute.

In addition, snow and ice may fall from buildings and bridges Wednesday.

In a briefing at noon Tuesday, Mayor Bill de Blasio said schools will be open Wednesday after being closed Tuesday.

Tuesday afternoon, state officials shifted storm resources from New York City and Long Island to upstate after the city escaped the brunt of the storm.

While snow totals were lower than expected in the city, Central New York may see over two feet of snow.

Some 2,000 National Guard members have been called up throughout the state to help.

The biggest concern for New York City at this point is when temperatures drop, and all the muck re-freezes.

"The way the weather pattern is shaping up, the storm has moved more westward," Gov. Andrew Cuomo said. "It is less of a snowstorm in New York City and Long Island. It is actually more sleet and precipitation. That is the good news.

"The warning is, we have to watch the temperatures as we go through the day and night, because the sleet and precipitation could turn into ice, and it could make the morning commute more difficult," Cuomo continued.

There were significant cancellations at area airports Monday and Tuesday because of the storm. Crews have been out cleaning runways.

While the Port Authority is optimistic as conditions improve, officials are still warning that the next couple of days are going to be spent catching up.

"Check with carriers. You can re-book electronically from home. Print boarding passes at home. If you can do it, please do it," Patrick Foye, the executive director of the Port Authority, said Tuesday.

"Departing passengers tomorrow and Thursday at LaGuardia and JFK should not go to the airport unless you have a reservation," Foye continued. "We expect heavy vehicular traffic to both LaGuardia and JFK."

This is the third year in a row that the MTA has canceled at least some subway service because of snow.

A state of emergency was declared by de Blasio and Cuomo, which allowed the city to mobilize all resources necessary to combat the storm.

The temperatures are projected to stay cold through the weekend and into Monday, the first day of spring.

The snowfall at JFK and Central Park, however, set daily records. The old records were set in 1958.

The storm produced snowfall amounts of over a foot in areas just north and west of the city, like Nyack and Brewster.

The forecast called for the snow to start around 11 p.m. Monday. The worst of the snow was expected to hit between 4 a.m. and 10 a.m. Tuesday, but ice began to mix in with the snow by 7 a.m.

A blizzard warning was in effect for much of the morning but was canceled at 8 a.m. Tuesday.

The city sanitation department deployed more than 700 salt spreaders and thousands of plows across the five boroughs.

New Yorkers can track progress of sanitation spreader and plow vehicles through the PlowNYC program at nyc.gov/plownyc

Alternate side parking is cancelled Tuesday and Wednesday.