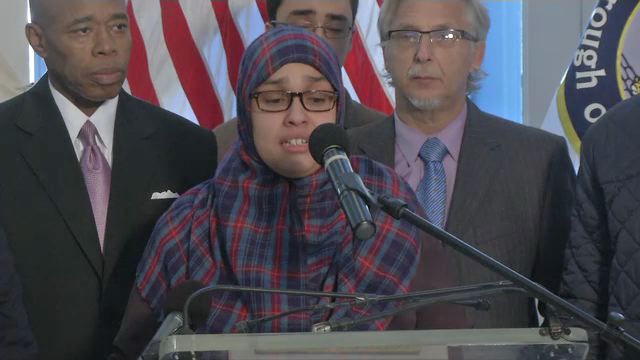 Hate crimes are up 115 percent since Election Day compared with the same time last year — one of the most recent victims, an off-duty Muslim NYPD Officer, spoke about her experience for the first time in public Monday. Our Michael Scotto has the story.

"We have Allah to help us and we know he will guide us through this hard time," said NYPD officer Aml Elsoskary.

Choking back tears, the city cop spoke publicly Monday after she and her son were verbally attacked in Brooklyn Saturday night.

"I know that New Yorkers are going to be there to help me and be supportive," she said. "And I have faith in everybody's support."

Officials say a man approached Elsokary, who was off-duty and wearing a hijab, and threatened to cut her throat. He also told her to "go back to your country."

On Monday, Elsokary appeared with Brooklyn Borough President Eric Adams and, in a separate news conference, with Mayor de Blasio. He condemned the incident and expressed support for the 900 Muslim officers serving in the NYPD.

"I was sick to my stomach when I heard that one of our officers was subjected to threats and taunting simply because of her faith," the mayor said.

The man accused of the attack has been arrested and charged with a hate crime and aggravated assault.

Elsokary, who was cited for heroism two years ago for rescuing two people from a burning building, thanked the city for standing by her.

"I became a police officer to show a positive side of New Yorker, a Muslim woman who can do the job," she said.

The incident is part of an alarming surge in hate crimes.

The NYPD says there have been at least 43 bias attacks since Election Day, compared to 20 during the same time last year — a staggering 115 percent increase.

More than half the incidents -- 24, according to officials -- have been anti-Semitic.

De Blasio is blaming Donald Trump's rhetoric during the presidential campaign for the increase in bias crimes. Trump has called for an end to the hate, but de Blasio says the president-elect needs to do more.

"We could lose lives because of this, and so the temperature has to be brought down," de Blasio said. "We're going to do this by showing positive examples to people."

The mayor is urging everyone in the city to come forward and report any acts of hate. He says that is the only way to stop them.