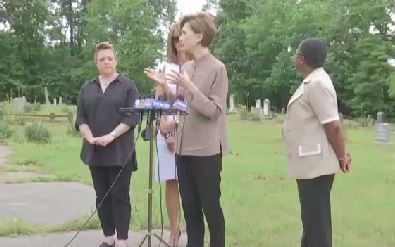 Researchers announce the findings of a report, revealing hundreds of historic graves on the South Shore.

As we've been reporting to you here on NY1, more than 500 unmarked African-American gravesites were discovered at the Rossville AME Zion Church Cemetery.

Researchers made the discovery after conducting a radar survey of the cemetery - which is considered one of the nation's most significant African American burial grounds.

It's also located in the historic Sandy Ground community - one of the first free-black settlements in the country.

"We hope that actually finding these graves brings the story of Sandy Ground back to life and it should be known and it should be honored," said Peg Breen, President, NY Landmarks Conservancy.

If you think you may have family members buried at the site, you are encouraged to call Rossville AME Zion Church.