The NYPD has sent vehicles to French locations and crowded areas across the city after multiple attacks in Paris left scores of people dead Friday, with at least 100 hostages killed at a concert hall alone.

Mayor Bill de Blasio called in to NY1 and said there were no specific threats against New York City.

De Blasio said the city is in constant communication with the NYPD's presence in Paris, as well as French authorities.

In a statement, the NYPD said, "There is no known indication that the attack has any nexus to New York City. We will continue to follow events closely and adjust our deployments accordingly."

The mayor said there will be an additional NYPD presence at the French government's facilities in New York City, such as the French Mission to the UN and the French Consulate, as well as other key locations around the city.

The French Embassy Cultural Center up the street had a patrol car parked out in front of its doors. The center's European flag and French flag were lowered and tied back as a display of mourning (photo seen at left). Some dropped off flowers and candles at the doorstep.

"It's tough because so many people, innocent people are murdered - excuse me - over senselessness," said one person outside the center, who got emotional while speaking. "It just makes me upset, as I said. So I'm just here to light my candle.

"I'd like to say shocked, but it's not really shock because this happens, it seems like, too often. And I'm just, I'm really sad and hurt by this," said another.

On Smith Street in Boerum Hill, Brooklynites with direct connections to France mirrored the disbelief.

"I did communicate with some friends, but I’m afraid to hear some of the answers," said one Brooklyn resident. "No matter what, I think it’s terrible, terrible."

Governor Andrew Cuomo said in a statement that he has directed state law enforcement to "remain vigilant in the wake of these senseless attacks."

"The New York State Police, the New York State Intelligence Center and the Division of Homeland Security and Emergency Services are actively monitoring the situation for any implications in New York State and remain in constant communication with their local and federal partners," Cuomo's statement read, in part.

Cuomo said the One World Trade Center spire will be lit blue, white and red in honor of the victims. (A photo of the spire can be seen at left.)

French officials say at least 153 people are dead after six locations in Paris came under attack.

The Associated Press reports that a French police official confirmed that at least 100 people were killed inside a Paris concert hall where attackers seized hostages.

The hostages were taken at the Bataclan Theater, where the American rock band "Eagles of Death Metal" were giving a concert.

According to the AP, Paris police prefect Michel Cadot said the attackers at the rock venue blew themselves up with suicide belts as police closed in.

Police officials told the AP that security forces launched an assault on the concert hall. One official said the attackers tossed explosives at the hostages.

Explosions could be heard inside the Stade de France during a friendly soccer match between France and Germany.

French President Francois Hollande was forced to abandon the stadium when the explosions were heard.

Fans remained inside the stadium after the final whistle, with several going onto the pitch as news of the violence spread.

There was also an attack on a restaurant in the city.

According to the AP, a spokeswoman for the Paris prosecutor's office said it's possible that terrorists are still at large, though Cadot said earlier that all of the attackers are believed to be dead. Cadot said authorities were searching for possible acocmplices.

A U.S. official told the AP that 70 U.S. citizens currently known to be in France were not accounted for as of 10:35 p.m. eastern time. 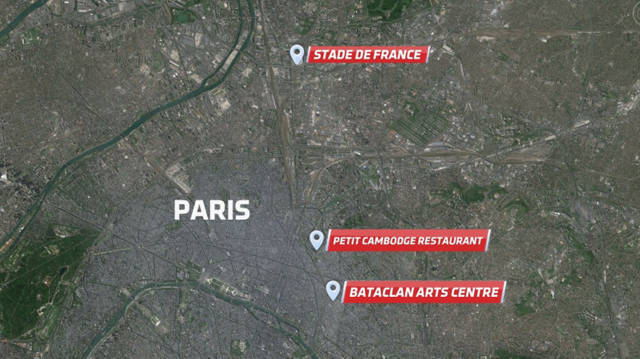 Hollande closed the country's borders and declared a state of emergency.

In a public statement, President Barack Obama called the Paris attacks an "outrageous attempt to terrorize innocent civilians." He said the U.S. stands ready and prepared to help France in any way necessary.

The White House says the president spoke with Hollande to offer condolences on behalf of the American people.

U.S. Homeland Security Department officials monitoring the attacks in Paris say there is no known, credible threat against the United States.

Both de Blasio and Cuomo sent sympathies to the victims in statements.

"The people of New York City are heartbroken to see our sister city of Paris shaken again by these thoughtless acts of violence, and we stand in solidarity with the residents of Paris and with Mayor Hidalgo during this tragic time. The victims of these horrific attacks, their families, and all the residents of Paris are in our hearts tonight. NYPD is in close contact with our international liaison in Paris and the local authorities and are closely monitoring the situation," de Blasio said.

Cuomo's statement read, in part, "On behalf of all New Yorkers, I offer my thoughts and prayers to all those who have been affected by the attacks in Paris earlier today. These were tragic and senseless acts of violence that have claimed innocent lives and torn families apart – and my heart goes out to the loved ones of all who have been lost. As more details emerge, I want the people of Paris to know that just as the world has stood by New York in times of tragedy, today New York stands with you."