New York City’s economic recovery rebounded during the week ended March 27 and the index nearly reached the level it had touched two weeks ago. The increase was driven by a resurgence in the home sale and rental vacancy rates, as well as a bump in restaurant reservations. The vaccination rate is a crucial component to the economic recovery of New York City, and residents and officials are hopeful in the recovery now that all New Yorkers age 16 and up are eligible for a vaccine starting April 6. The city reached 500,000 vaccines per week, last week, for the first time as more mobile testing and pop-up sites were put to use.

New York City’s recovery stands at 57.5 out of a total score of 100, according to the New York City Recovery Index, a joint project between Investopedia and NY1. The index increased nearly 2.5 points from the prior week and returned to a similar level from two weeks ago. More than one year into the pandemic and New York City’s economic recovery is still only a little more than halfway back to early March 2020 levels. 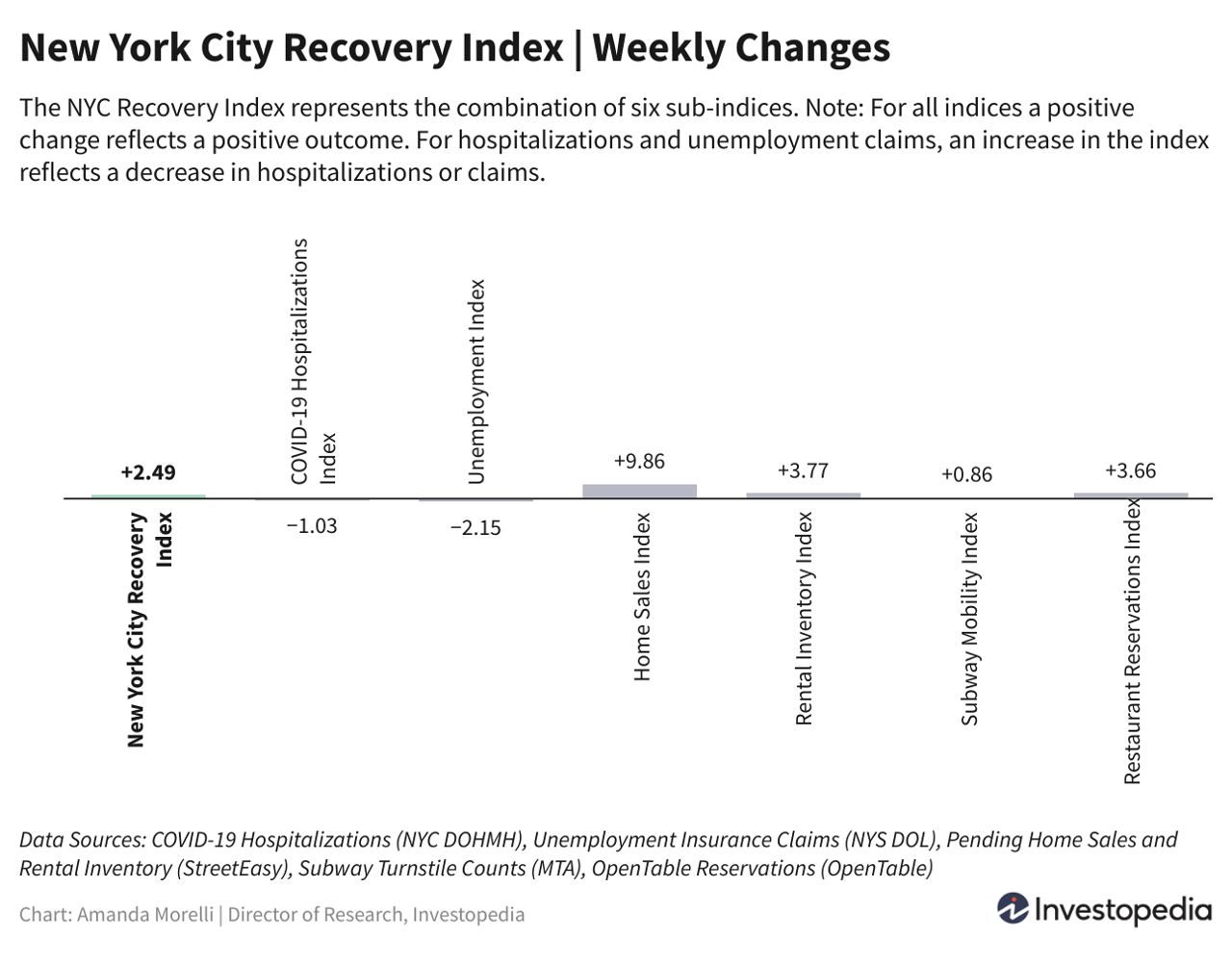 More than 26% of eligible adults have received both vaccine doses in New York, according to VeryWell Health. The state is projected to have enough vaccines for all of its adult population by June 10 and is on pace to achieve 70% vaccination by July 2021, placing it 19th out of the 59 U.S. states, municipalities, and territories.

Unemployment numbers for New York City have increased for the second consecutive week during the week of March 27, when 20,162 New Yorkers filed for unemployment, up 283% from the same period in 2019. This is a larger increase than has been seen in previous weeks.

The Bureau of Labor Statistics reported that U.S. employers added 916,000 workers to their payrolls as the mass vaccine rollout and the reopening of economies emboldened them to add to their payrolls. The nationwide unemployment rate fell from 6.2% to 6% during the month. However, New York City reported a 13.2% unemployment rate for February, higher than the statewide rate of 8.9% and above the nationwide rate of 6.2%.

Unemployment numbers will likely only significantly drop after the vaccination rate rises and businesses are able to fully reopen. Though the unemployment claims rate increased during the week of March 27, the month of March had an average of approximately 18,661 weekly claims, the lowest monthly average since the pandemic started last year. The expansion of NYC’s vaccination eligibility will hopefully accelerate the downward trend of unemployment claims.

During the week of March 27, the percentage of pending home sales, or homes in contract, increased week-over-week, returning to a level experienced two weeks ago. There were 731 home sales during the week of March 27, compared to 695 the week prior, representing a larger year-over-year percentage increase (70%) compared to the previous week (60%), according to data from StreetEasy.

New York City’s reopening is drawing back families who are interested in buying larger spaces. Families are also attracted to the discounted prices of homes. Some developers have been slashing prices by as much as half in order to sell their projects. Manhattan, Brooklyn, and Queens all had year-over-year increases of 83%, 63%, and 60%, respectively.

New York City’s rental market continues to be more negatively impacted by the pandemic than the housing market, but the percentage of units available to rent has continued to drop week-over-week. The number of rental vacancies in New York City declined week-over-week to 31,929 during the week of March 27, from 34,155 the week prior, according to data from StreetEasy. This drop pushed the index score up four points to 55, the highest level reached so far in 2021.

As New York City continues its economic recovery, it will be important to watch the rental market to see if people return to New York City after leaving in 2020 for the suburbs or other cities with lower costs of living. The rental market is currently booming thanks to inexpensive prices attracting new tenants. The best deals are in Queens, with the best Manhattan deals on the West Side.

Subway ridership was relatively flat during the week of March 27 as the rolling seven-day average was approximately 64% less than the average during the same period in 2019. The MTA reported that just under 1.8 million New York City riders used public transport during the week of March 27, up from 1.62 the week prior. This marks the seventh consecutive week of stabilization or improvement. While it is heartening to see a positive movement in the raw numbers of ridership, there still needs to be real sustained growth for ridership to approach normal usage levels.

The Biden administration’s American Rescue Plan allocated more than $6 billion in federal funding for the MTA, which will significantly help the MTA as it works to bring back ridership and recover from the pandemic.

Restaurant reservations increased significantly during the week of March 27, bumping the index measure three points to 25. The estimated number of seated diners was 74% lower than the same period in 2019, compared to 77% lower the previous week, according to data from OpenTable.

Restaurant reservations have effectively hovered at autumn 2020 levels since indoor dining was partially opened in February. New York City restaurants are limited to 25% indoor capacity, while the rest of the state is limited to 75% capacity for indoor dining. Future reservations in the city will depend largely on an increase in the vaccination rate, a decline in COVID-19 cases, and warmer weather.