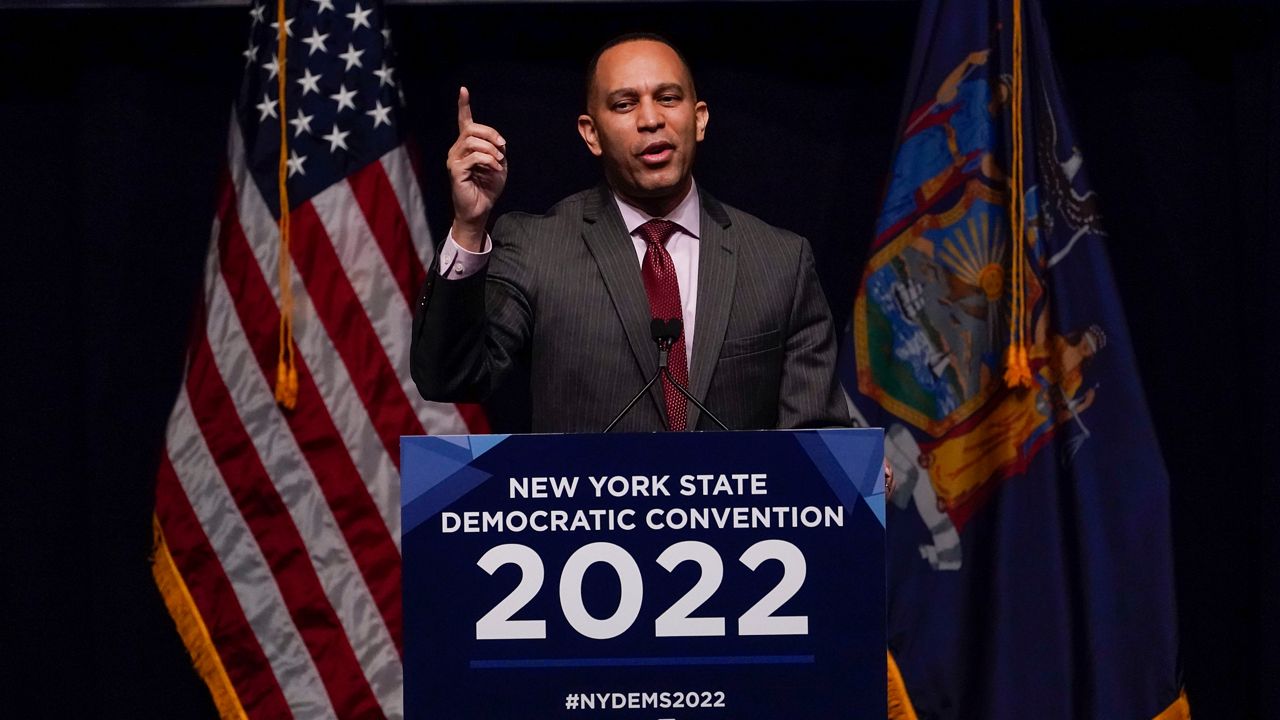 Rep. Hakeem Jeffries on how he would lead House Democrats

Next week, Democrats in the House of Representatives will decide who will lead them over the next two years. Rep. Hakeem Jeffries is so far running unopposed to be the next Democratic minority leader, setting him on the path to be the first Black lawmaker to lead a party in Congress.

The Brooklyn native, who represents parts of his home borough and Queens, joined Errol Louis on “Inside City Hall” Monday to discuss how he would lead the Democrats as they enter the minority in January.

“We have some challenges ahead,” Jeffries said. “I do hope that Republicans will be willing to work together to solve problems for everyday Americans and not double and triple down on the extremism that the American people by and large rejected during the midterm elections.”

Jeffries would replace Speaker Nancy Pelosi as leader of the House Democrats and has earned the endorsements of Majority Leader Steny Hoyer and Whip James Clyburn. All three leaders will remain in Congress, Jeffries said, and he will look to their guidance as a new generation takes over.

“It’s been an honor to be able to work closely with Speaker Pelosi, a historic speaker, a speaker for the ages,” Jeffries said.

Jeffries said he supports Rep. Katherine Clark of Massachusetts and Rep. Pete Aguilar of California in their bids to become caucus whip and caucus chair.

In an “Inside City Hall” interview with @errollouis, @RepJeffries says House Democrats will continue to rely on current caucus leaders Nancy Pelosi, Jim Clyburn and Steny Hoyer as they transition to new leadership roles.

"Pelosi [is] a historic speaker — a speaker for the ages." pic.twitter.com/axUWdzb4we

Role of Democrats in the minority

While House Republicans are still deciding on who will be the next speaker of the House, GOP lawmakers have said they hope to investigate the Biden administration in a number of areas — including the president’s son Hunter’s business dealings, the Department of Justice’s investigations into former President Donald Trump, and the origins of COVID-19.

Jeffries says the job of Democrats in the minority will be to “aggressively push back” against “some effort to satisfy the conspiracy caucus” and extreme policy prescriptions on reproductive health care and social safety net programs.

“The American people don’t want to see the permanent political campaign,” Jeffries said. “House Republicans by and large want to criminalize abortion care. The American people are not there. Let’s see what they do as they move forward and hold the gavels temporarily.”

The American people do not want to see the "permanent political campaign," according to @RepJeffries.

He added that he will aggressively point out the hypocrisy of Republican extremism. pic.twitter.com/rQGEAh0qNj

Another area of focus Jeffries said Democrats need to prioritize is democracy protections.

He said there is hope the House and Senate will be able to pass the Electoral Count Reform Act before January when the new Congress is sworn in.

The legislation was drafted in response to Republicans’ efforts on Jan. 6, 2021, to object to the certification of the 2020 presidential election results from certain states. It would clarify the role of the vice president as ceremonial — Trump and his allies worked to pressure Vice President Mike Pence to intervene during the certification process — and raise the threshold for objecting to certification of the vote to one-fifth of all members of Congress and the Senate.

“We had the violent insurrection, but leading up to it the former president and his allies were plotting and scheming to try to find ways to take advantage of the ambiguity in the Electoral Count Act to bully Mike Pence to do something he was not empowered to do,” Jeffries said, noting there is bipartisan support in both houses of Congress to reform the process. “It’s my hope that we can get that done before the end of the year.”

While some Republicans have made the case the United States should cut back aid to Ukraine in the war with Russia, Jeffries said the funding should continue even as lawmakers prioritize domestic issues.

Jeffries used major legislation passed by Democrats over the past two years as examples that Congress could balance domestic policy with foreign aid, naming the Inflation Reduction Act, the CHIPS Act, and the Infrastructure Investment and Jobs Act.

“Those are incredibly strong foundations to build upon,” he said. “While at the same time, making sure we understand that we have a responsibility as the leader of the free world to be there for Ukraine.”

The war in Ukraine is a battle between truth and propaganda, @RepJeffries says.

"If Ukraine prevails, the free world prevails, and that's good for all of us." pic.twitter.com/XrQFcXHV5J

While congressional Democrats held off a red wave nationally, they struggled in New York, losing key seats in the New York City suburbs. Jeffries called for an “after-action analysis” to help New York Democrats win back those seats in 2024.

“There was a micro-political climate that was created that made it difficult for our candidates, particularly in Nassau County to survive,” Jeffries said, pointing also to Rep. Sean Patrick Maloney’s loss in the Hudson Valley and NY-19 in the Southern Tier as campaigns where Democrats could have done better.

“It needs to be an after-action analysis that is comprehensive, that is honest, that is authentic, that is unsparing if necessary, but also that is forward-looking so that we have a battle plan,” he added.

Jeffries argued Democrats should lean into their public safety policies to help counter Republicans’ case that rising crime in some areas results from Democratic leadership. Public safety became a central point of discussion in the midterm elections across the state.

“We need an affirmative effort to address the public policies concerns of public safety and mental illness,” he said. “I believe Democrats are on the right side of these issues, but we have got to make sure we lean in aggressively on how we communicate New Yorkers and, of course, the American people.”

There were many surprising Republican wins in New York state during the November general election.@RepJeffries gives his take on the GOP victories. pic.twitter.com/EUnuLBeGks