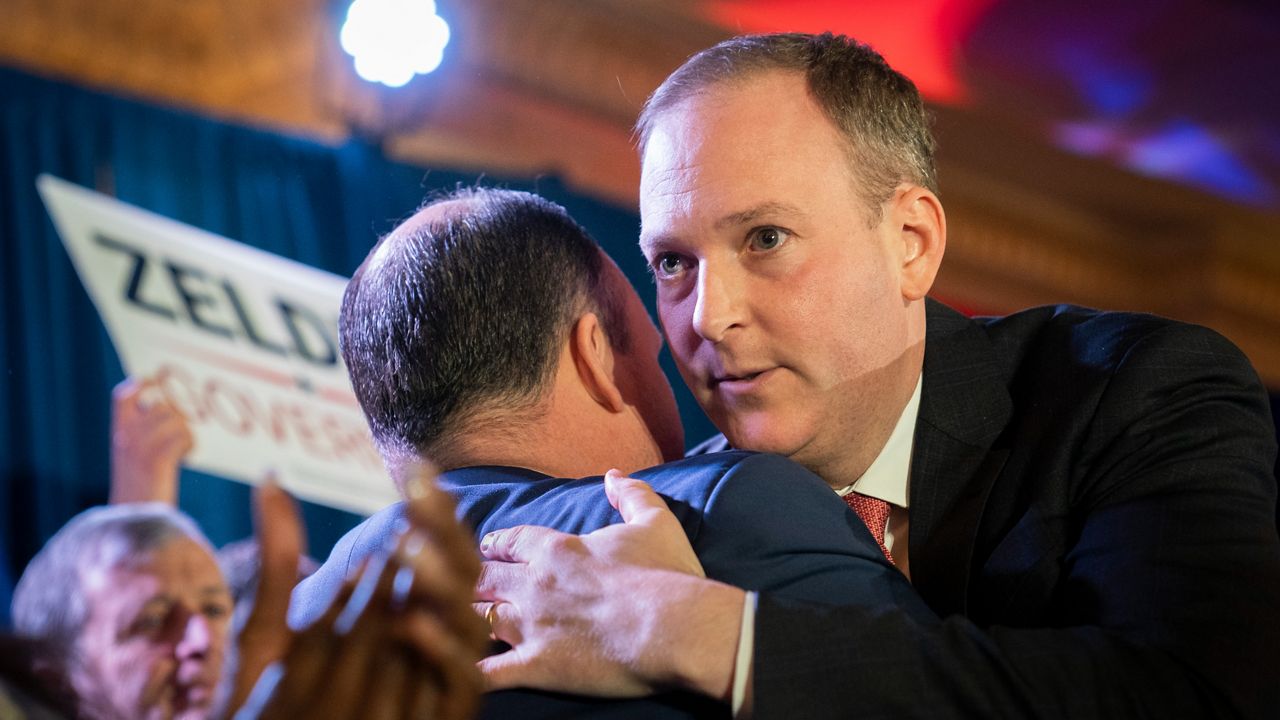 U.S. Rep. Lee Zeldin shares a hug on stage with a supporter after speaking to delegates and assembled party officials at the 2022 NYGOP Convention, Tuesday, March 1, 2022, in Garden City, N.Y. (AP Photo/John Minchillo)

Zeldin 'not aware' of pardon requests from Congress members post-Jan. 6

Long Island Rep. Lee Zeldin said Thursday he was unaware of any of his Republican congressional colleagues asking for pardons in connection to the Jan. 6 Capitol riots and efforts to overturn the 2020 election.

After the riots, Zeldin objected to certifying the election results from Arizona and Pennsylvania in a bid to put the final results of the 2020 election into doubt.

“Quite frankly, I don’t know what they would have been asking for pardons for,” Zeldin told Errol Louis on “Inside City Hall” Thursday. “I associate someone asking for a pardon because of some type of crime that was committed. And I’m not aware of any member of Congress connected to Jan. 6 or otherwise being involved in some type of crime connected to the 2020 election.”

Zeldin cruised to a victory in the Republican gubernatorial primary, beating three opponents by making appeals to voters on issues of public safety, underlining his conservative bona fides, and going on the attack against Gov. Kathy Hochul.

Zeldin won on the strength of his showing upstate and on Long Island, but lost in New York City to Andrew Giuliani — son of former Mayor Rudy Giuliani — and in Westchester to Rob Astorino, the former county executive there.

Now, as his campaign is pivoting to a general election in a state where Democrats far outnumber Republicans, he believes he can win enough votes to topple Hochul.

“While the campaign was focused on a Republican primary, at times, we were also making outreach for general election voters. Inside of New York City, there are pockets of votes,” Zeldin said. “Inside of Staten Island, in Bay Ridge, in Brighton Beach, in Middle Village, where you have more conservative pockets.”

Zeldin dismissed the overturning of Roe v. Wade by the Supreme Court as a distraction from what he views as “the top issues right now facing New Yorkers”: public safety and the economy.

Zeldin, who is anti-abortion, said in video exclusively obtained by NY1 earlier this year he would appoint a “pro-life” health commissioner and that anti-abortion advocates would have an “open door” in his administration if he were elected governor.

Regarding public safety, Zeldin called for the rollback of bail reforms, a “dangerousness” standard for judges to consider when assigning bail, the repeal of a law that limited the use of solitary confinement, and an overhaul of the state’s parole board to require a unanimous vote, instead of a majority.