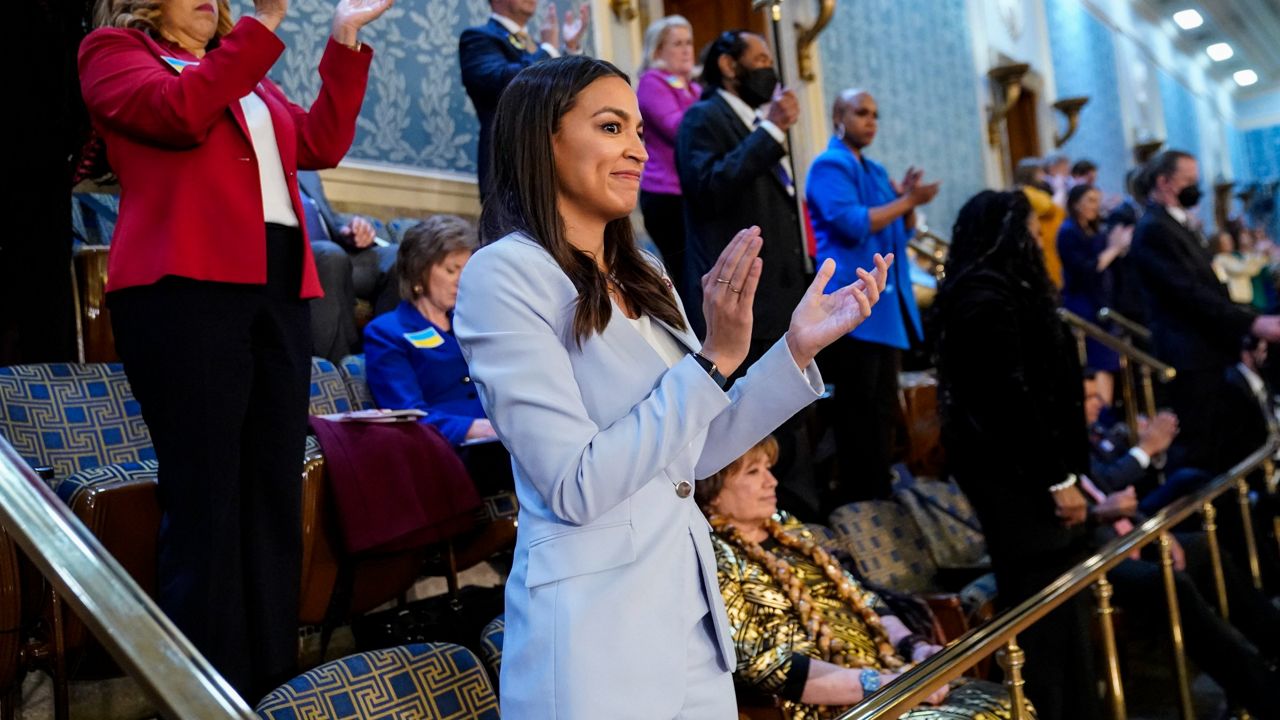 Rep. Alexandria Ocasio-Cortez, D-N.Y., claps as President Joe Biden delivers his State of the Union address to a joint session of Congress at the Capitol, Tuesday, March 1, 2022, in Washington. (Jabin Botsford, Pool via AP)

'No human being is safe on Rikers Island,' AOC says in exclusive NY1 interview

From her office in the Bronx, Rep. Alexandria Ocasio-Cortez joined NY1 political anchor Errol Louis on “Inside City Hall” for an exclusive interview that aired Thursday on the situation at the city’s troubled jail complex, Rikers Island.

“This is simply not a place that is structurally safe, whether it’s the CO’s, whether it’s the people that are being kept there,” said Ocasio-Cortez, who toured the facility in October 2021. “No human being is safe on Rikers Island, and it should be closed.”

The congresswoman said that if a federal monitorship helps speed up the process of closing Rikers Island, she will support it.

Ocasio-Cortez, a fierce advocate for shuttering Rikers Island, expands on her stance regarding Rikers in this wide-ranging interview as she plots her third campaign for Congress — all while the city deals with a rise in crime and a fierce debate over bail reform. ​But the five boroughs and the country itself may be contending with an even larger crisis, Ocasio-Cortez said.

“We’re at a really critical point, there’s what’s going on nationally and what’s going on locally,” she said. “As a federal official, I think some of the greatest threats that are happening to our country overall have to do with the state of U.S. democracy.”

On the topic of her reelection campaign, Ocasio-Cortez said that she’s focusing on both national and local issues. She wants to improve voter protection laws as well as making sure health care and other health programs are accessible to communities. She said she is working to improve public safety within her communities and assuring there is rent control for struggling families.

Ocasio-Cortez told Louis that one of her greatest achievements as congressional representative of District 14 was working alongside the Jacobi Medical Center’s program Stand Up to Violence, a group established to address the special needs of victims of trauma. Ocasio-Cortez secured half a million dollars for the program, which will help outreach to the community.

“We actually start digging into the real causes and demographics and people who are struggling that are part of these incidents,” she said. “We actually found that we’ve been able to develop a system where reoccurrence of crime drops by more than 50%.”