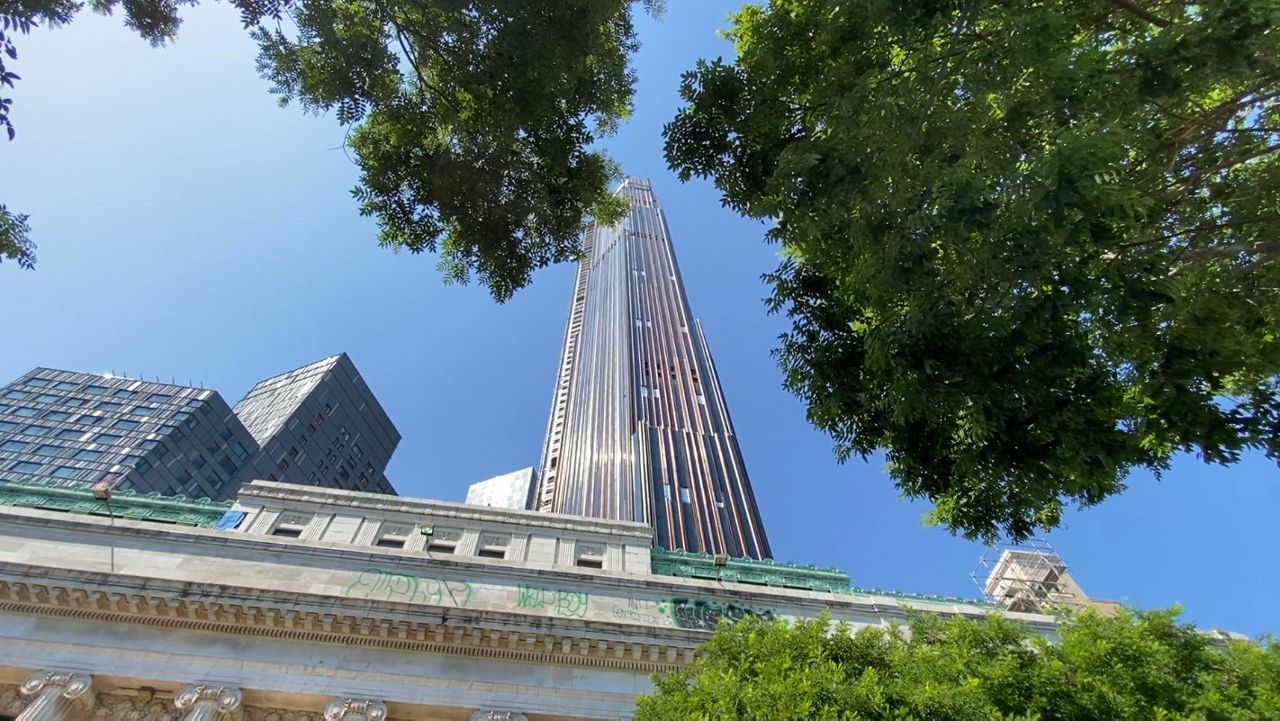 The Brooklyn Tower is now the tallest building in the borough, measuring at over 1,000 feet. (NY1/Rebecca Greenberg)

Inside the Brooklyn Tower, the borough's tallest skyscraper

Brooklyn has another skyscraper. The Brooklyn Tower is now the tallest building in the borough, measuring at over 1,000 feet.

Soon, hundreds of people will call the tower home, but housing advocates fear it will drive up surrounding rents and further gentrify Downtown Brooklyn.

The tower boasts breathtaking views, 93 stories of neo-art déco apartments on top of the landmarked neoclassical Dime Savings Bank. The two structures built more than a century apart, now one.

“We wanted not only to preserve it but bring it back to life,” Gregg Pasquarelli, architect, said. “We knew that we had a responsibility that this was going to be the tallest building in Brooklyn. We were the making the Empire State Building of Brooklyn and we knew it had to be good.”

Pasquarelli says he drew inspiration from the borough itself, incorporating black steel, copper and a lot of enormous windows.

“So, when you look at the oblique, the building looks solid, not glass,” said Pasquarelli. “And that was an important part for us for making it this landmark with gravitas at the center of Brooklyn.”

Sales began in March for the 150 condos which occupy everything from the 53rd floor up. Prices range from $875,000 for a studio to $8 million for a four bedroom. The building will start accepting applications for the 400 rentals in August, that’s roughly the bottom half of the building. Developers chose to make 30% of those rentals affordable in order to receive a state tax exemption for over 30 years.

“Affordable housing policy has never been able to keep pace with the displacement that’s caused by the new development,” Gib Veconi, Chair of the Prospect Heights Neighborhood Development Council said.

He says the 2004 rezoning of downtown Brooklyn leads to super-tall buildings going up and driving out many longtime residents.

“As large buildings get proposed and approved, even before they’re built, they start to have an effect on everyone’s view of what’s appropriate and they continue to drive larger and larger buildings,” Veconi said.

Pasquarelli counters that saying super-tall buildings like Brooklyn Tower will benefit businesses and residents in Downtown Brooklyn — a neighborhood that he says deserves to flourish.

“I think the continued growth is a signal that New York City is still healthy and thriving and a place that people want to come to.”

Developers expect the building to be completed by August with the first residents moving in, in the Fall to what is now a permanent and prominent part of the Brooklyn skyline.