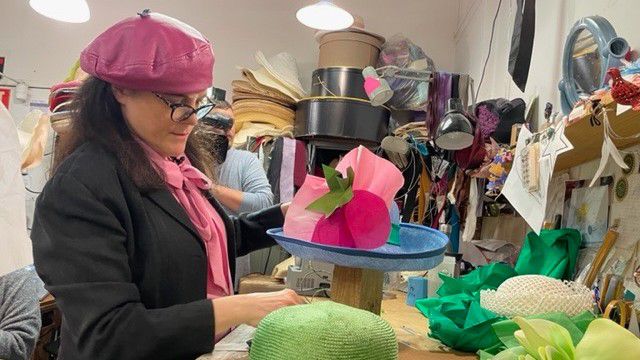 Many of the hats that will be worn at Saturday’s Kentucky Derby have a connection to New York.

They were made by Christine Moore, a milliner who has been making hats in Midtown for more than 25 years.

Her colorful creations feature different designs and materials based on the customer's request.

When we recently caught up with her, she was busy working on one of the 500 hats she and her team had to make for people attending this year's big horse race.

"The Derby really is all about fashion," Moore said. "Everybody thinks out their outfit perfectly because they want to stop the photographer's eye, they want a compliment and they want to outdo their friends."

The fashion game can be so competitive, with some spending upwards of $1,000 on one of her creations. She takes custom orders and matches the hat to the person's outfit.

Moore, who describes her craft as a “nerdy passion," has always been creative. She started her career on Broadway where she helped design costumes for a number of shows, including "Phantom of the Opera."

“In theater, you learn so many different skills and techniques and how to use different materials," she said.

Over the years she's helped dress several A-listers including Mary J. Blige, Jennifer Lopez and Katy Perry. But then came COVID-19 and the orders stopped coming in.

With the demand for new hats nonexistent, Moore pivoted to making masks.

She donated 3,000 of them to groups across the country.

As things now begin to return to normal, her business has picked up again. Now, the big problem is finding enough staff. It has forced her to be more hands on during the busy derby season.

"Our fingers are all calloused but we’re in good spirits and we love what we do,” she said.

It's that love for her craft, she says, that keeps her going during crunch time.