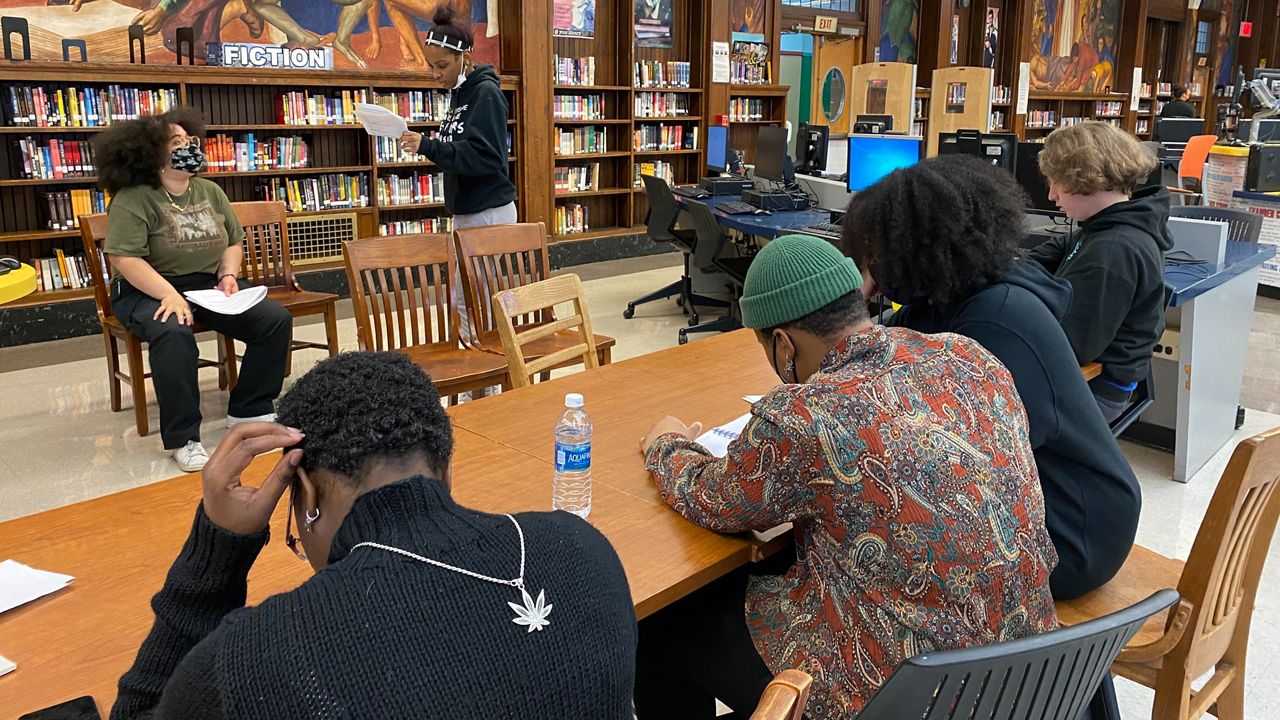 Students in the Epic Theatre Ensemble's after school program rehearse a student-written and directed play. (NY1/Justine Re)

Free theater program introduces students to the arts and policymaking

Dislisima Vickers is directing a couple dozen city school students in a play she wrote. As rehearsals go on after school, each line holds special meaning to Vickers, who never envisioned her words would be brought to life.

Because Vickers is not a teacher or an established playwright. She’s a tenth grader at Bronx High School for Writing and Communication Arts.

“I feel like very excited and proud,” Vickers said. “I didn’t really imagine something like this would happen at this point in life.”

Vickers wrote an adaptation of Romeo and Juliet that is set in the 1980s and being produced through Epic Theatre Ensemble’s after-school program.

The ensemble includes middle school and high school students across the city. Vickers said she was always drawn to literature, but the ensemble opened her eyes to producing new material.

“We started off this program by looking at different scenes from Romeo and Juliet. I started to realize it wasn’t just old people stuff,” she said with a laugh. “It was something that was relevant today, especially when you break it down to what caused a lot of the conflicts in the play.”

Alumni producing associate Amoy Gill knows the power of this arts program. They are an employee for Epic Theatre Ensemble now and Gill wants the students to grow in the same way they did when they were in high school.

“To feel empowered, and to feel like they can be leaders in their community,” Gill said.

And better yet, it’s free. The city’s Department of Education funds the program in part.

“It’s really important for us that everybody in the city has access to the arts,” said James Wallert, the co-founder and co-artistic director of Epic Theatre Ensemble. “It is not something that should just be for the rich and the wealthy.”

The ensemble’s influence goes beyond the classroom.

Besides learning the fundamentals of the arts at rehearsals, students take the skills they learn and apply them to performances before policy makers.

“The students get commissioned by different organizations to create touring plays about educational justice, educational segregation, standardized testing and assessment,” Wallert said. “Those conversations a lot of times don’t involve students and a big part of our mission is to make sure that students are the center of those important conversations.”

These opportunities have served as a turning point for Vickers. Her experience motivates her to follow her dreams in the arts and entertainment industry.

“Joining Epic has really made me actually think a career in arts, play writing, writing in genera,l and directing is possible for me,” Vickers said.

To join or learn more about the company visit epictheatreensemble.org