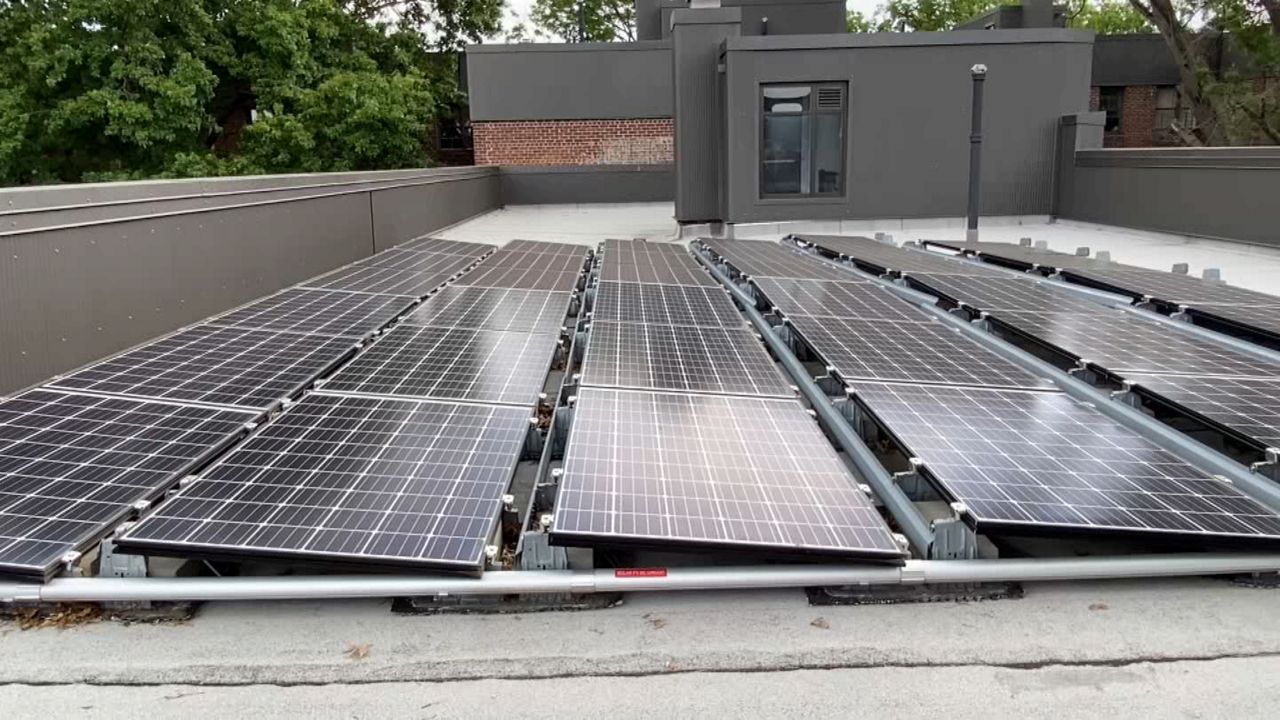 Solar panels atop the Eastchester Heights apartment building in the Bronx are among the upgrades the landlord has made to improve tenants' experience and comply with city law. (NY1/Lori Chung)

“Before, it would take days before they’d come. Sometimes they would never come,” said Nesmith.

But, she admitted that she’s been impressed by ongoing investments at Eastchester Heights under the ownership of Taconic Partners, particularly in the infrastructure.

“These are old buildings and to come in and rebuild them and remodel them and fix the pipes,” said Nesmith. “They’ve done a lot. I’ve seen other landlords come in and do nothing.”

The solar panel system there is a big part of bringing the 87-year-old complex up to date and in line with standards for cleaner, more sustainable energy, a priority for the city under Local law 97.

“The panels provide over a million kilowatt hours of clean electricity” explained Andrew Schwartz, a Taconic Partners executive. “That’s the equivalent to taking 200 cars off the road each year.”

Schwartz says embracing clean energy standards is also a priority for the company. They’re among the many residential owners in the city grappling with ways to confront climate change by increasing efficiency and resiliency in an aging building.

“The complex was built in 1935, so every day there’s something that needs to be done… there’s facade work, there’s heating work,” said Schwartz.

The law requires most buildings over 25,000 square feet to meet new energy efficiency and greenhouse gas emissions limits by 2024 with stricter limits on the way by 2030.

Local Law 97 has faced pushback. Some co-op and condo owners who are suing the city to block the law, raising concerns about the expense of retrofitting older buildings and the costs of fines for those who can’t comply. But, it’s a victory for advocates like Eddie Bautista who heads the New York City Environmental Justice Alliance.

“Seventy percent of the city’s greenhouse gas emissions are just from the building sector alone, which is not surprising when you have over 900-thousand buildings in the city of New York,” explained Bautista.

According to Con Edison, 38,139 solar systems have been installed across the city, 3,777 of them in the Bronx. Advocates say those numbers need to grow and Bautista’s organization found that low-to-moderate-income communities face difficulties accessing funds from city programs meant to help homes and buildings upgrade.

“Disinvestment has been more the traditional pattern in our history,” Bautista said. “So, it was clear that the city of New York had to step up and provide the kind of resources and support that building owners are going to need.”

So far, “they’ve only retrofitted or helped underwrite something like 5-thousand buildings.”

The city has a long way to go, but as a major developer with financial resources, Schwartz said his company is taking a proactive approach as part of its mission to make communities better.

Tenants like Nesmith say the attention to the infrastructure improvements show.

“The heat is better. The water is cleaner,” said Nesmith.