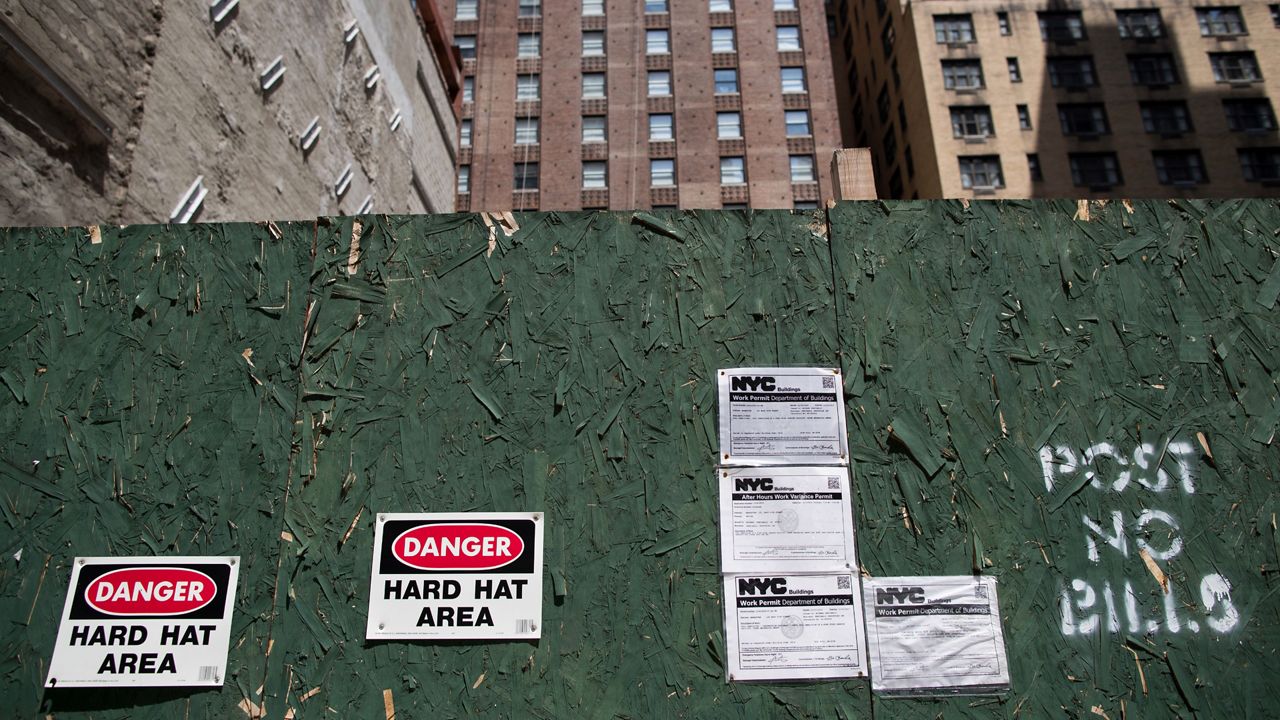 Permits and warning signs hang on a fence securing a vacant lot on 47th Street between Lexington and Third Avenues. (AP Photo/Mary Altaffer)

In the 19th century, 31 Belvidere was the home to a popular brewery called William Ulmer Brewery. It closed thanks to Prohibition, bringing a revolving door of owners, until it sat vacant and abandoned.

But a new chapter could be just around the corner.


“We have an opportunity to bring this building back to life,” said Jordan Rogove, an architect with DXA Studio.

Rogove is part of the team set to transform the New York City landmark into 34 apartments.

It’s a drop in the bucket to address the city's housing crisis.

Some experts believe that tens of thousands would meet the demand, in a city that has changed because of COVID-19.

A poll in May showed just 8% of Manhattan workers returned to the office five days a week.

And at the same time, residential rents have been soaring throughout the city.

Right now, rents are tracking at record rates, more than $5,000 for the average monthly rent in Manhattan.

The Real Estate Board of New York estimated converting just 10 percent of the more than 100 million square feet of potential office space would lead to 14,000 apartments, mainly in Manhattan.

But what seems like a perfect marriage gets complicated.

Sheila Pozon, a special counsel with Kramer Levin Naftalis & Frankel, represents developers in the city and said they can’t just take an office building and make it into a bunch of apartments. That needs the city’s stamp of approval and that isn’t always easy.

“So you're hamstrung by the existing regulations,” Pozon said.

For example, for most of the city, buildings constructed after 1961 are ineligible to be converted from commercial to residential.

It's expensive to do this work. Major projects can cost a couple hundred million dollars, and high costs can often lead to higher rents, meaning less affordable housing.

But there is one area of Manhattan where there has been a boom in high-rise conversions: the financial district.

Data from about 30 years ago shows about a quarter of the financial district's offices were vacant. Since then there has been a transformation into tens of thousands of apartments.

Nathan Berman’s company, MetroLoft NYC, has converted millions of square feet of commercial space into apartments, all in lower Manhattan.

Berman said city-made policy changes helped spur development in the area, including incentives for developers and new rules that allowed more conversions. He thinks the model can be replicated elsewhere in the city.

That doesn’t mean it’s easy as long as the building is outside Manhattan. Rogove said it’s taken six years to get to get to this point in Brooklyn, where construction on the old brewery will start soon.

He said historic tax credits are the only reason they can afford the project.

Now Rogove said they’re looking ahead. A brewery brought 31 Belvidere to life and if it’s up to Rogove and the team, it will be part of its rebirth, as a ground-floor business with apartments above it.