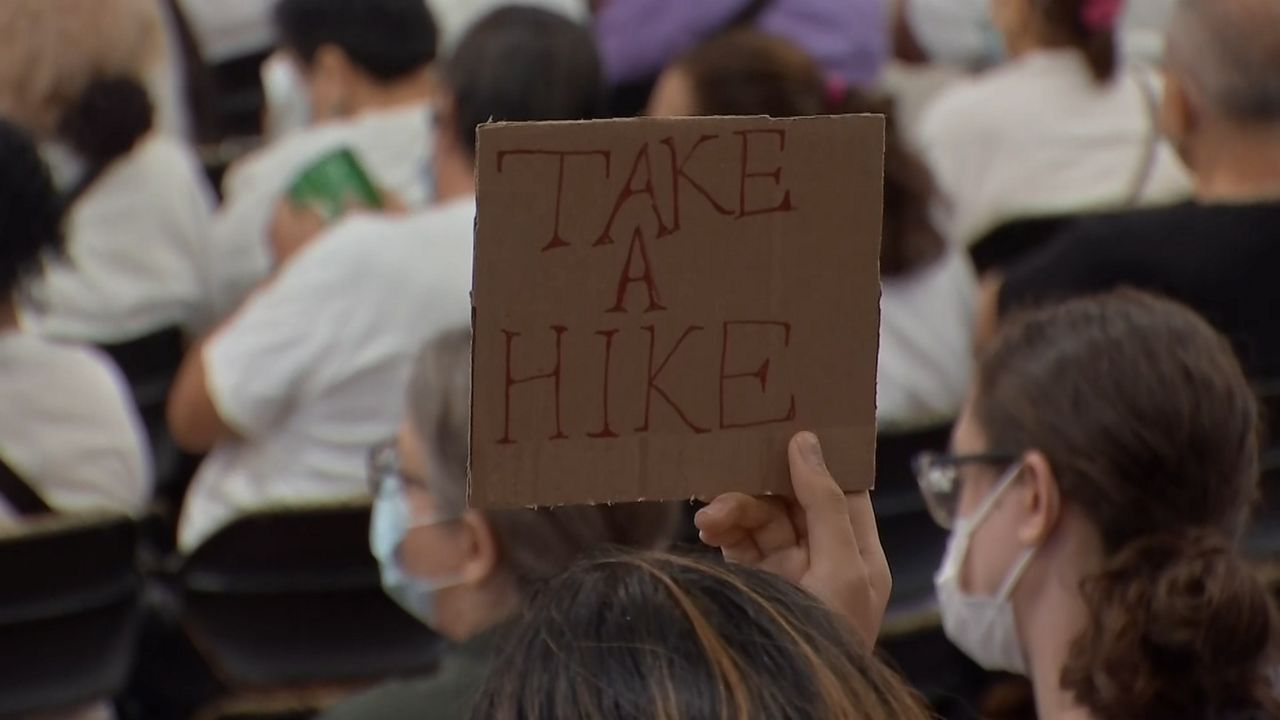 Angry renters in stabilized apartments told members of the Rent Guidelines Board at a public hearing in Jamaica, Queens, to vote against a proposed rent increase and freeze regulated rents.

The crowd chanted, "No rent increase."

The Rent Guidelines Board already had a preliminary vote in favor of allowing landlords of the city's one million regulated units to increase rents by 2% to 4% for one-year leases and 4% to 6% for two-year leases.

"If they raise the rent, what am I gonna do? What will I do? I have a 15-year-old son. I’m a single mother," Keisha Clarke, a rent stabilized tenant who testified, told NY1.

A stabilized rent allows Clarke to live in a one bedroom apartment in Jamaica with her son.

She’s also out of work from Resorts World Casino due to an injury, and fears she’d be unable to afford a rent increase. She also thinks her landlord is undeserving of it

"It doesn’t deserve no increase at all, nothing they fix," she said. "What do they do with that money?"

Some landlords showed up to testify in favor of a hike as the crowd of renters booed and jeered them.

"You try and take a car from the 1960s and make it as efficient as a Tesla. It’s very difficult," said Chris Athineos, who owns seven Brooklyn apartment buildings with about 125 units with his family. "We have buildings that were built in 1883, so we have to keep these buildings going."

Roughly half of his units are rent stabilize.

"We want to maintain our buildings and then continue to improve them, but we can’t do it on thin air. The city is constantly hitting us with water increases, just went up almost 5%, our real estate tax increases, the assessments go up, fuel is an all-time high, inflation is over 8%."

Many renters here testified that their apartments are in poor condition now and don’t want their landlords to be rewarded with higher rent.

Natalia Marques, a journalist and rent stabilized tenant paying $568 for a room in a Flatbush Brooklyn apartment, testified against the increase.

"Landlords are saying they need this money for repairs and rent stabilized tenants know that the repairs we get are shoddy, they’re insufficient," Marques said.

The final vote on the increase will be held on June 21 and take effect on leases beginning in October.