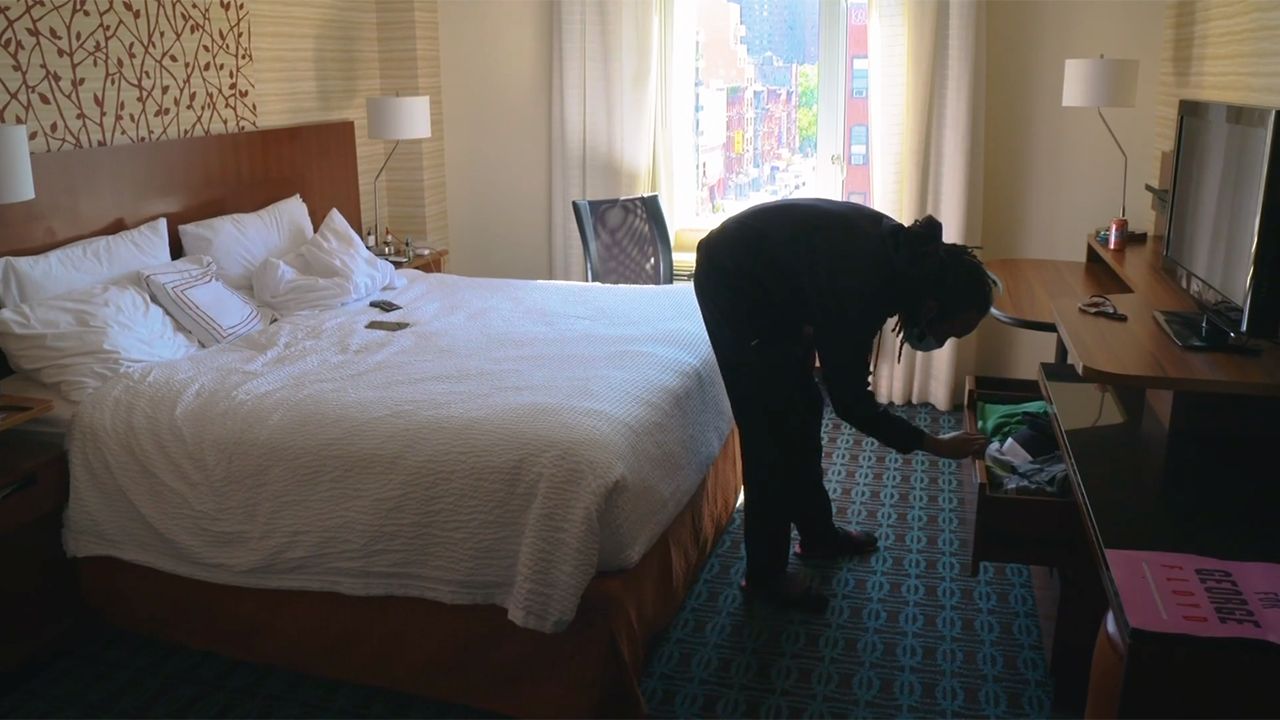 Exclusive: Close to 20 Percent of NYC Hotels are Housing the Homeless

James Shields wants to get his life back together.

“It feels like I have my own spot again,” Shields told NY1 earlier this month. "I had my own apartment for like 10 years. Now I am just maintaining and just living my life and hope I can get out of here, be a better person for myself and my daughter."

For now, Shields is staying at a hotel in Manhattan. He has a job at a sushi restaurant.

He holds the hope of a new apartment, a new life that is much stronger.

“I do think when I get enough money to save up and move out,” Shields said, pausing to wipe tears from his eyes. "I think I will be a better person after I get out of here."

His 15-year-old daughter is in the city’s homeless shelter system. And, even though it may not look like it, Shields is, too.

His hotel has been temporarily converted to a homeless shelter — a step the city took to stop the spread of Coronavirus.

Since the virus swept through the city in March, the de Blasio administration has been sending thousands of homeless people from large, crowded shelters to hotels where they can practice social distancing in their own rooms.

There are about 700 hotels in New York City. One hundred and thirty-nine of them are occupied by homeless people. That means almost 20 percent of the city’s hotels are operating at least, in part, as homeless shelters. Sixty-three of those hotels took in homeless people from the city over the last three months because of COVID-19. It’s unclear when they will leave.

Step inside The Palace on the Bowery and you might see why. Beds are just feet apart. This is the shelter Shields slept in until earlier this month.

When COVID-19 hit the five boroughs, it quickly spread in the shelter system. Since March, at least 96 homeless New Yorkers have died from the virus. There are more than 17,000 single homeless adults in the city’s shelter system, and 13,000 are now living in hotels.

The city’s homeless czar says this is not a permanent policy change.

“The consensus of the city before COVID was commercial hotels were not an appropriate way to shelter people,” said Steven Banks, the head of the city’s Department of Social Services. "We are using this only as a temporary bridge to get back where public health can be appropriately protected in a congregate setting.”

The hotel-turned-shelter is run by the Bowery Residents’ Committee.

“We’re doing them about one or two a week,” said Muzzy Rosenblatt, CEO and President of the Bowery Residents’ Committee. "It’s a huge undertaking to coordinate and stage and move. It’s not just moving residents and staff, but commuters and files, and records and supplies. It’s everything you need. It’s moving a little community."

Even though the number of moves the city and shelter providers have done over the last three months is massive, the city will not still not disclose a list of the hotels they are using to protect residents’ privacy. We found many hotels on our own. There are at least 30 in Manhattan.

Just go to 36th street. On one side is the SpringHill Suites. You can get a room for $139 on booking.com. It’s full of men from Pamoja House in Brooklyn.

Outside on a recent morning, one described the rooms like this: “Nice queen size bed, flat screen TV. We got cable. It’s better than being over there in the shelter.”

Directly across the street is a DoubleTree. This hotel is full of men from a shelter in the Bronx.

Head across town to 35th Street. The Kixby is a luxury, boutique hotel with 195 rooms and suites. It’s booked until September because it’s a shelter.

"It’s keeping some cash flow going for the hotels, but we were there. We stepped up when the city had a need," Vijay Dandapani, the leader of the city’s Hotel Association, said. "Why this happened? They are in shelters in a congregate settings that is arguably, or most definitely, not good for them from a pandemic standpoint. So here they are in individual rooms, you are reasonably well-protected from the virus.”

In April, the association landed a $78 million initial contract to find hotels for the homeless. At the time, coronavirus raged across the city. The city’s hotels saw no sign their business would return anytime soon.

So the booking started.

Multiple shelter residents living in hotels told NY1 they were told to expect to stay in these new locations for about six months. Banks told us there is no move-out date.

“We are going to be governed by public health concerns, and at the point at which it is safe to resume operations of congregate shelters and stop using commercial hotels, we will do that,” Banks said.

Its contract with the hotel association goes through October. The city is expecting the final cost of that contract to grow. Officials could not say by how much. Negotiations are ongoing.

The city has a commitment from FEMA to pay 75 percent of the costs of the hotel rooms. But the extra services, the moves, the staff, that’s all costing taxpayers.

For now, Shields feels safer, like his life is heading in the right direction. At least in the near future, he has some hope.

"Are you hopeful now?” we asked him last week.

“I am very hopeful and very grateful now,” Shields said. "They did open my eyes up to a lot of new things."